CHICAGO -- Their 28-year-old rookie sensation already has a hamburger named after him. Their No. 5 starter has thrown a no-hitter. Their second baseman makes contact on 99.3% of strikes. They've lost both their starting left and center fielders. And their Hall of Fame manager's head-scratching decisions have lit up sports-radio phone lines.

Welcome to the American League's most interesting -- and best -- team.

The Chicago White Sox had their coming-out party in 2020, making it to the postseason for the first time since 2008. Then they sent shock waves through the baseball world with their managerial change this past winter by first firing Rick Renteria and then replacing him with Tony La Russa, who previously managed the White Sox from 1979 to 1986 and last held the position in St. Louis a decade ago.

Questions about the hire have extended into the first month of the season with La Russa's early decisions drawing scrutiny. But he's managing the team that sits atop our MLB Power Rankings six weeks into his return to the dugout, thanks to a group playing as well as anyone in the game right now.

The best rotation in baseball?

The White Sox would not be where they are without the five pitchers taking the ball on the mound. It's the best rotation in the American League, and it's not even close, as they have compiled the only AL ERA under 3.00. Lucas Giolito, Dallas Keuchel, Lance Lynn, Dylan Cease and Carlos Rodon are built to keep Chicago in games all summer long -- and perhaps well into the fall as well.

"They compiled a staff every team would love to have," one AL Central scout said. "They have a mix of youth and veterans. Lefties and righties. Hard stuff and a little bit softer."

Considered their No. 5 starter coming into the season, Rodon is their No. 1 at the moment. He's 5-0 with a minuscule 0.58 ERA and an April no-hitter against the Cleveland Indians. This was a player available to every team in the league after he was non-tendered by these same White Sox in December.

Finally healthy after undergoing Tommy John surgery in 2019, Rodon has put himself squarely in early contention for the Cy Young Award -- all while pitching on a one-year, $3 million contract.

"It might be the best bargain in baseball," said the scout.

Unless, of course, you consider the team's not-so-secret weapon out of the bullpen, who is making the minimum.

"And then there's Kopech," said the same scout. "He might have the best arm of them all."

The White Sox are so stacked on the mound, they don't need to rush Michael Kopech or fellow flamethrower Garrett Crochet into their rotation, instead playing it safe with a pitcher who missed the past two seasons and another who made the jump from college to the major leagues last year.

Kopech came over in the 2016 blockbuster trade that sent Chris Sale to the Red Sox and netted the White Sox two building blocks for the future in the dynamic right-hander and third baseman Yoan Moncada. Kopech has still thrown just 36 major league innings in a career interrupted by issues both on and off the field.

He was suspended 50 games while in the minors in 2015 for testing positive for oxilofrine, a stimulant in violation of the Minor League Drug Prevention and Treatment Program. Kopech insisted he never took the drug knowingly.

Then he fractured his pitching hand during a 2016 fight with a teammate. After coming over to the White Sox, he had Tommy John surgery and eventually opted out of the 2020 season.

The State of Baseball

Are games too long? How can baseball maximize its new generation of stars? We dig into the topics that will shape the game far beyond this season. The State of Baseball »

"Our scouts had a solid understanding of what drove him and his character," White Sox general manager Rick Hahn told ESPN. "We felt those transgressions were matters of maturity and nothing to do with his work ethic or desire to be great."

Kopech is in a hybrid role, spot starting and also pitching out of the bullpen in high-leverage multiple-inning outings. He has been dominant, striking out more than 14 hitters per nine innings pitched.

"We're all really pleased with the way he hasn't shown any rust as of yet," Hahn said. "He really hit the ground running. It's a testament to his own work ethic."

Seemingly every season there's that one pitcher who could be the difference-maker for a contender but also must be handled carefully from a usage perspective. Think Stephen Strasburg with the Nationals in 2012, Chris Paddack of the Padres in 2019 and Julio Urias for the Dodgers last October. Because of time missed, Kopech is in that category. Is he more valuable as a starter in September and October or in the pen, impacting multiple games a week?

"You do get to deploy a reliever to your highest-leveraged opportunities over the course of multiple games -- which has some appeal," Hahn said. "At the same time, 0-0, in a World Series game, early on, is a pretty decent leveraged situation as well."

In Chicago's case, the five pitchers in the rotation could make the Kopech decision for the White Sox.

"That's the definition of a good problem to have," said the AL Central scout.

While Kopech's ascent to a key role in Chicago was anticipated, the arrival of the biggest surprise in the White Sox lineup was anything but.

Yermin Mercedes is a reporter's dream. Brash, fun and with a good backstory. The current MLB batting average leader was a Rule 5 pick during the minor league phase in 2017.

"I remember [senior director of baseball operations] Dan Fabian bringing in the list of names for the minor league phase," Hahn recalled. "I remember him distinctly saying it worked with [Omar] Navarez, so this was a similar idea. I also saw a YouTube video of a bat flip that he had in the winter leagues, showing the early evidence of Yermin's flair."

Navarez was a nice find for the White Sox at the time but nothing like Mercedes has been. A great bad-ball hitter, Mercedes is batting .256 on pitches not in the strike zone. And his pitch recognition is off the charts.

"He's seen a lot of different pitchers, seen them in different countries, at different levels," Hahn said of Mercedes' journey. "He's paid his dues and reaped the benefits of his time.

"The best thing about him at the plate is with two strikes, he takes a different approach. He has a big, powerful swing in hitters' counts, but with two strikes he shortens up. He really is two different types of productive hitters rolled up into one."

And then there's that flair that Hahn noticed right away. He calls it "a feature, not a bug." The result? Less than a month into the season, "The Yerminator" hamburger was on the menu at a local eatery, leading Hahn to dub him a "triple threat" -- good for burgers, baseball and the media. But has the White Sox GM tasted the Dominican chimi burger that features grilled onions, grilled tomatoes and grilled peppers?

"I've been remiss in my culinary responsibilities as general manager," Hahn admitted. "I'll get one at some point."

La Russa was known for tactical precision in Oakland and St. Louis, but that hasn't been the case so far after a 10-year absence from the job. That's not an opinion held by only die-hard fans or social media. La Russa himself has admitted to no fewer than three in-game mistakes over the first six weeks, including leaving starter Giolito in too long in an outing when Giolito said afterward he was gassed.

But there was no bigger moment than when La Russa admitted he didn't know the part of MLB's extra-inning rule that states the pitcher in the game does not have to run the bases to start an inning -- even if his spot in the order made the last out of the previous inning. 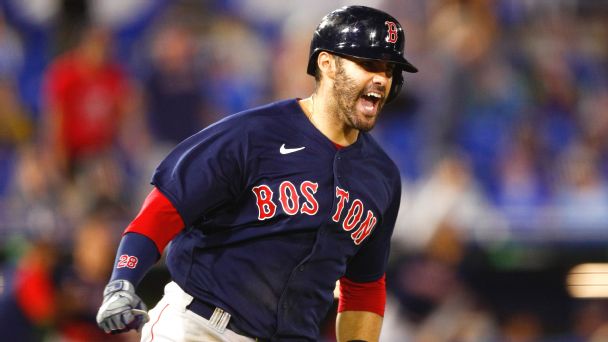 Catch the 2021 MLB season on ESPN and the ESPN App.

Closer Liam Hendriks was fortunate not to get hurt on the basepaths against the Reds as a result, while the gaffe led to a reporter reading the rule to La Russa in a postgame Zoom interview.

On the other hand, the 76-year-old has connected with a new generation of players inside his clubhouse.

"The atmosphere that he has created, along with the coaches, has been outstanding," reigning AL MVP Jose Abreu said early on.

La Russa can thank Albert Pujols for telling Abreu to trust his new manager. In the end, players like Abreu will determine La Russa's success or failure in his second stint with the team. A team so stacked, even with Eloy Jimenez and Luis Robert out because of injury, that there's still no room for Pujols, who was designated for assignment by the Angels recently.

With lesser-known players, such as second baseman Nick Madrigal, who's hitting an MLB-best .341 with two strikes, the White Sox have depth to cover current needs and plenty of options to use come the trade deadline in late July.

Their long rebuild is officially over. And a slowish start has given way to a run to the top of the league. La Russa was asked whether his team is starting to remind him of championship ones he had in Oakland and St. Louis.

"If this was September, I'd have more to say," La Russa responded. "All I can say is, when I saw the talent on the roster, it's real. I'm talking about pitchers, relievers, offense and defense. I think the heart and spirit we have is going to bring that talent out. If today is the last day you ask me that question, it wouldn't be very good. Let's hope you ask me that again in September."