JACKSON, Tenn. -- How many ACL injuries have I covered in women's basketball? Sadly, way more than I can recall.

But this was the first.

In the late 1980s, Kristen Goehring was one of the top girls' players in Tennessee, but she had suffered a torn anterior cruciate ligament in her knee that took away her senior season of high school basketball. Kristen was 17 and dealing with the first major adversity of her life.

I was 23 and a rookie at the Jackson Sun newspaper. In college, I had decided that covering women's sports was my mission. This was the first lengthy feature at my first job, a confidence-builder early in my career.

I knew nothing about ACL injuries. I went to Kristen's rehab sessions at the hospital and at her home, learning as I went. Since, I've seen torn ACLs end players' seasons and careers, the injury altering the course of NCAA tournaments and WNBA playoffs. From Sue Bird to Tamika Catchings to Sheryl Swoopes, it has happened to many of the greatest who have ever played, and every fan of women's basketball has likely been impacted by it.

Some of the injuries initially seemed harmless: a simple cut, a jump-stop, coming down for a rebound. Others were obvious, with the leg bending in a way it shouldn't. Sometimes a player would yell in agony; sometimes she wasn't sure whether she was badly hurt.

I've chronicled the heartbreak and pain caused by ACL injuries, so often feeling that ache inside when someone goes down and grabs her knee. But I've also been inspired by the courage and fortitude it takes to recover, and the profound things players say they learned about themselves during that process.

After writing a story last year about a player who had come back from two ACL tears, I was reminded of Kristen. Her story remains vivid for me more than 30 years later. She played for Ole Miss from 1989-93 and I followed her career from afar after moving to another newspaper. The last time I'd seen her, she was a teenager dealing with the grief of a lost season and uncertainty about what was ahead. Who was she now? I went back to Jackson to find out.

Kristen -- her married name is Lee -- is a clinical pharmacist who has five children with husband Mark. Her playing days are long over, but the love of basketball still burns inside her, and lives on in her kids.

She introduced me to daughters Macey and Olivia, both teenage basketball players at Trinity Christian Academy in Jackson. Her oldest, Savannah, was at college, where she plays basketball for Montevallo University in Alabama. Sawyer and Gabriel are 12-year-old twin sons.

Sawyer is the only non-basketball player; he's into tennis and cross country. Gabriel was playing in a basketball game that night, accompanied by Mark, who also works in the pharmacy industry.

I had brought a copy of the Jackson Sun sports section from February 1989, with a photo of Kristen working with a physical therapist. Macey was the first to take the paper to read it. She had recently been named a finalist for Miss Basketball in Tennessee as a junior; since my visit, she has signed to play next year with North Alabama of the Atlantic Sun Conference.

This story is about her mother at around the same age Macey is now. In the summer of 1988, the world seemed Kristen's for the taking. She was being recruited by multiple SEC schools, including Tennessee and Vanderbilt. Her North Side High School team had a good chance at a state championship in the coming year.

Then Kristen tore her ACL, plus her medial and lateral meniscus, at an elite camp. Her senior season was over months before it started. Many of the colleges stopped calling, but Ole Miss didn't back away. That gave Kristen hope and motivated her through rehab: There was still an SEC school that wanted her (and she wore Ole Miss gear to practically every PT session).

Her father, Ray Goehring, had played college basketball and admitted he'd once been opposed to girls and women in sports. Then Kristen was born, and he saw his extreme competitiveness in his feisty, determined little girl. Not all men need to have a daughter to be supportive of women's sports, but it helped Ray see things differently.

During my interview in 1989, Kristen's parents and her high school coach gave a generally upbeat assessment of how she was doing. When Kristen and I spoke alone, she acknowledged things were more complicated. She wondered whether she would return as strong as before the injury. She missed being on the court with her teammates in games, and felt somewhat forgotten.

And something deeper bothered her. Kristen revered her father, and their bond had been forged strongly around basketball. The sport had become how she measured her self-worth, and she thought it was what her father valued most about her, too.

"I'm worried my dad won't love me as much if I can't play," she finally said. "My brother is playing now, so maybe my dad loves him more. I know that all sounds terrible for me to say."

I admired her honesty -- it seemed exactly how many kids would have felt. In 2019, I reminded Kristen of that conversation, and she nodded. As a parent, she knows her father's love was unconditional. Her Christian faith is a major component of her life, and she now sees the injury in this way: She doesn't believe God caused it but did use it to teach her critical lessons.

"I had been told all my life, 'You've been gifted' regarding basketball," she said. "I had my identity completely wrapped up in it. I look back now and say the Lord used a very dark time in my life to help me realize what I was worshipping."

By this point, Macey finished the newspaper story, which ended with Kristen checking in during the last minute of the final home game of her missed senior season, and the crowd rising as one.

"You got a standing ovation?" Macey asked.

"I did," Kristen said. "They realized ... well, imagine working like you have, and getting the things you've gotten -- and then all that being taken away."

But then Kristen shook her head, irritated at the memory. The competitor in her still hates it.

"My teammates all went to the other side of the court, and I stood there looking like a goof," she said. "I thought I was going to really get to play, like shoot a quick 3-pointer or something. But it was just symbolic. Coach was really protective of me. I found out later he had threatened them they'd run forever the next day if any of them passed me the ball."

Learning to live with ACLs

As the years went on, I began to think of ACL injuries as a monster that haunted women's basketball. Two of the most "infamous" ACLs I've covered happened within days of each other in March 1998, when Stanford lost starters Vanessa Nygaard and Kristin Folkl, and then became the only No. 1 seed in the women's NCAA tournament to lose to a No. 16 seed, Harvard.

UConn's Bird suffered one that cut short her freshman season. Tennessee's Catchings lost the last few months of her senior season because of an ACL. They both became WNBA stars -- Bird is still playing -- and will be Hall of Famers.

Other players never got the chance to fully reach their potential because of ACLs. Shea Ralph, now an assistant at UConn, has had five ACL injuries, including one that ended her Huskies' career as a senior during the 2001 Big East tournament final. She was the 2000 Final Four MVP as a junior; her career was one of peaks and injury-caused valleys.

"I can't play anymore; I can't run outside," Ralph said. "There is a certain amount of pain I have to live with every day, and some stiffness. But I know my body well enough to know how to manage it.

"I would have loved to have played longer; it definitely cut my career short. But I can't think about it much, or I'd crumble. I look at it like I was meant to get into coaching."

Data tells us that women in basketball tend to be more susceptible to ACL injuries than men. There has been continuing research, including physiological factors, and women's basketball programs have developed specific strength-training and exercises to try to avoid the injury.

Some of that seems to have worked. The surgery and rehab process have improved. As Ralph said, "Strength training, conditioning, nutrition -- all of that wasn't as paramount in terms of focus when I was recovering as it is now. The people I worked with gave me everything they had. But if I'd had more knowledge then, it may have changed some things. But how do you totally prevent ACLs injuries? You can't."

Ralph, 41, is avoiding knee replacement as long as possible, but realizes one day she'll need it. Even so, she said of her basketball playing career, "It was worth it."

"That's saying something when you go through a college career and then four pregnancies," she said. "I can't really squat down. The range of how far I could pull it back is limited."

She was healthy throughout college and played a lot. Ole Miss went to the NCAA tournament three times in Kristen's career for coach Van Chancellor. In 1990, the Rebels lost in the Sweet 16 to eventual national champion Stanford. The next year, Ole Miss was without one of its key players, Jackie Martin, who had suffered an ACL injury four games into the season, and lost to Stephen F. Austin in the first round of the NCAA tournament. 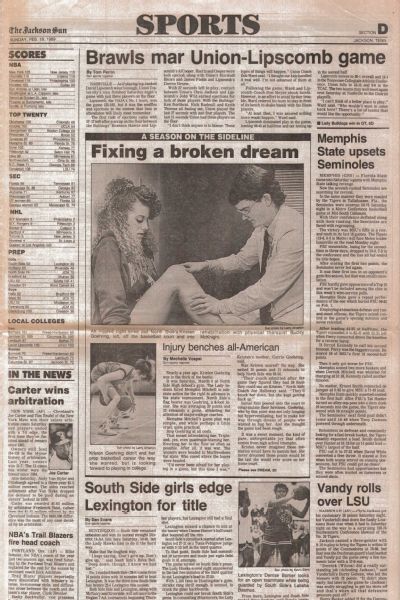 A 1989 Jackson Sun article chronicled Kristen Goehring's battle back from an ACL injury.

But the best was to come. In 1991-92, Ole Miss won its only SEC regular-season title, going 11-0 in league play and 29-3 overall. One of Kristen's favorite memories from that season was beating Tennessee at home in overtime, 80-78. The Rebels ran out of gas, though, falling to Georgia in the '92 SEC tournament, and then, as a No. 2 seed, to Cinderella No. 8 seed Missouri State in the Elite Eight.

Her final season, Kristen was a captain for the Rebels, and her college career ended with an SEC tournament loss to a Vanderbilt team that went to the Final Four. She finished with 1,102 points (9.1 PPG) and 626 rebounds (5.2 RPG). She wishes she had played in a Final Four, but most of her memories are great.

She and Mark married in 1995 and settled in her hometown of Jackson to be close to her parents and brother. With her children, the butterflies of game competition returned. These are now many of Kristen's happiest -- if sometimes nerve-wracking -- moments: seeing her kids do what she used to do.

And even though at the time of her ACL tear she thought the most important thing in her life had been taken away, now she can't imagine what would have happened without the injury.

"If I hadn't gotten hurt, I probably would have gone somewhere else to school, not Ole Miss," she said. "And then I never would have met Mark there. We wouldn't have these five kids we're blessed with. Back then, I thought the world had come to an end, but it was just part of my life's story."

And as it turned out, it will always be part of mine, too.