Thanks to today's NHL board of governors vote, it looks like an NHL team is coming to Seattle. But what should that team be called, and what should it look like?

That was the subject of our latest Uni Watch design challenge. And Uni Watch readers were definitely up to that challenge -- the signal-to-noise ratio on these entries was probably the best of any contest we've ever run, with lots of very worthy designs. Well done, people!

So without further ado, let's have a look at the best entries we received. For each of these, you can click on the design to see a larger version of it. 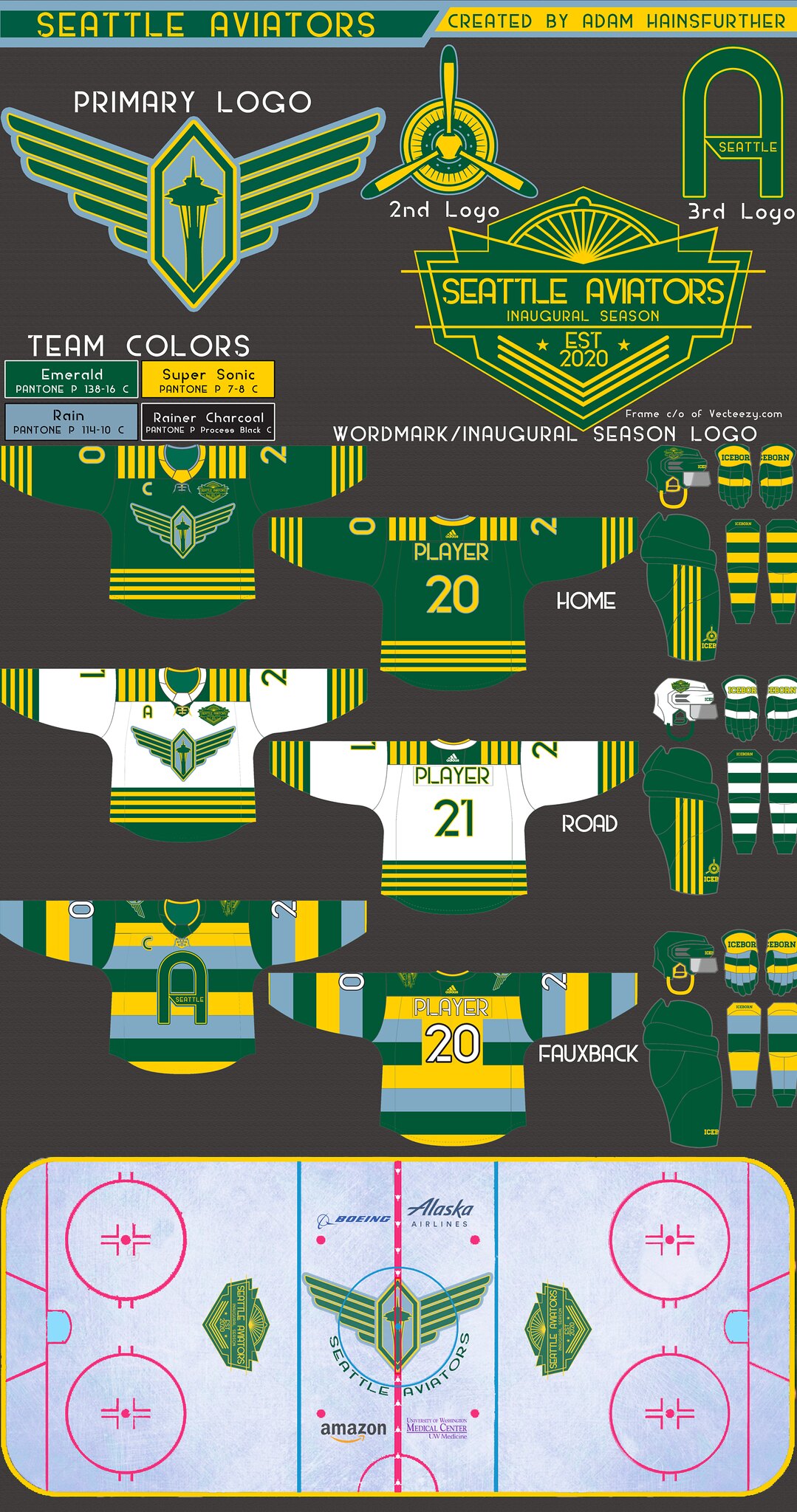 Many readers incorporated Seattle's iconic Space Needle tower into their designs. Adam Hainsfurther did so most successfully, putting the Needle at the center of a military-style crest for his Seattle Aviators design. Good use of bold colors and striping, too.

Honorable mention goes to Andrew Arena, who also came up with an excellent Space Needle-based concept for his Seattle Metropolitans: 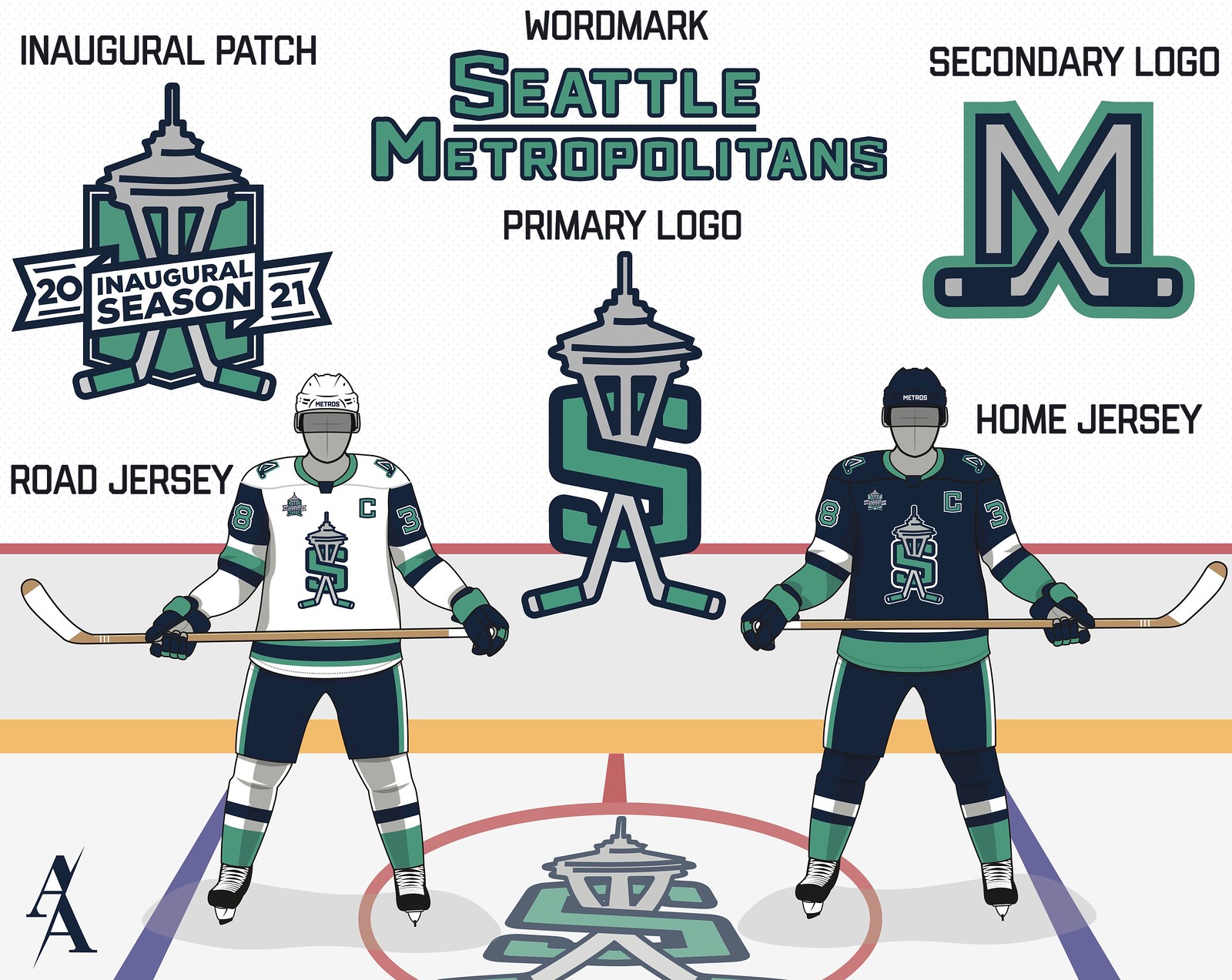 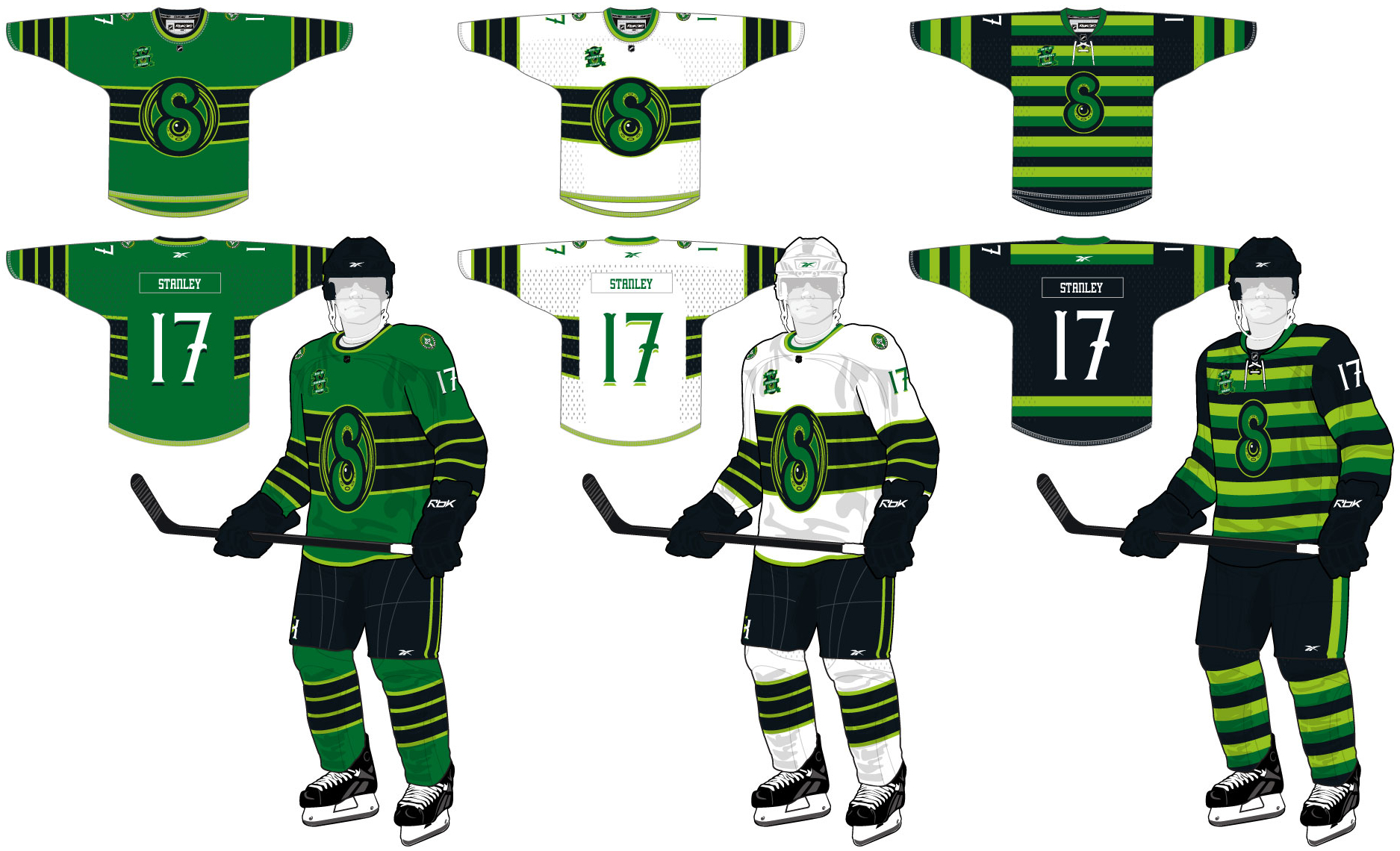 What's a kraken, you ask? It's a legendary sea monster that's sort of like a giant squid, and it's gotten a lot of traction among Seattle fans as a potential team name. Lots of readers whipped up kraken-based designs, usually involving a tentacle shaped like an "S." Many of these were really good, and it was hard to choose the best one, but Bowen Hobbs gets the nod by virtue of including a an eyeball in his crest design, which gives the kraken more of a sense of character.

Honorable mention goes to Christian Legault and John Elbertson, who did very solid work (with bonus points to Elbertson for his excellent inaugural season patch). 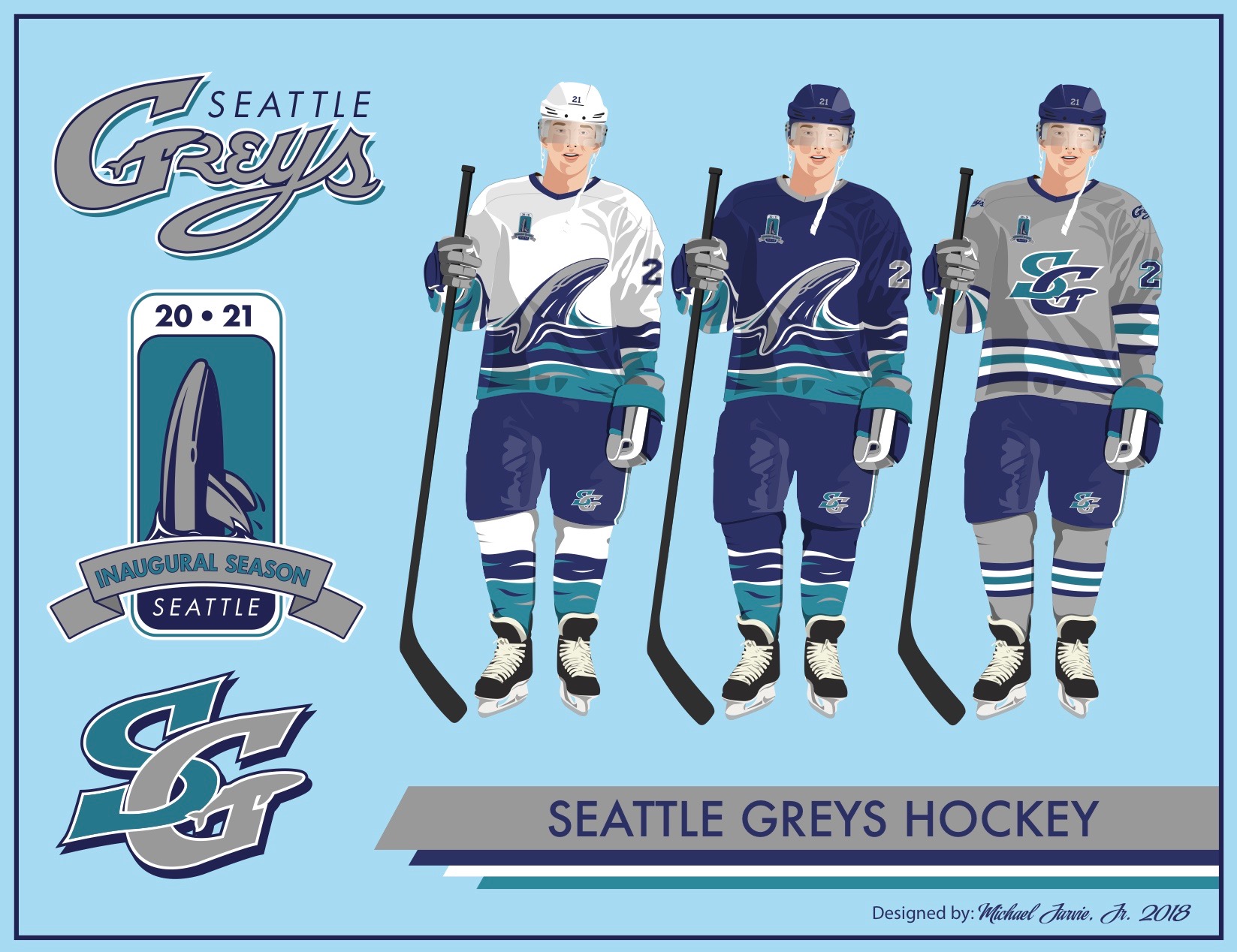 There were also lots of entries based on non-monstrous sea life, the best of which was Michael Jarvie Jr.'s superb design based around a gray whale. Realistically, nobody's going to call their hockey team the Greys, but everything else about Jarvie's concept is spectacular. The Whale rising out of the sea, the aquatic-themed striping on the torso, sleeves, and socks -- it all works. Nicely done.

Honorable mention goes to Matt McElroy for his very nice Seattle Sea Lions concept, and to Diego Yanez, who came up with -- get this -- the Seattle Sushi. Yes, that's sort of ridiculous, but take a look: 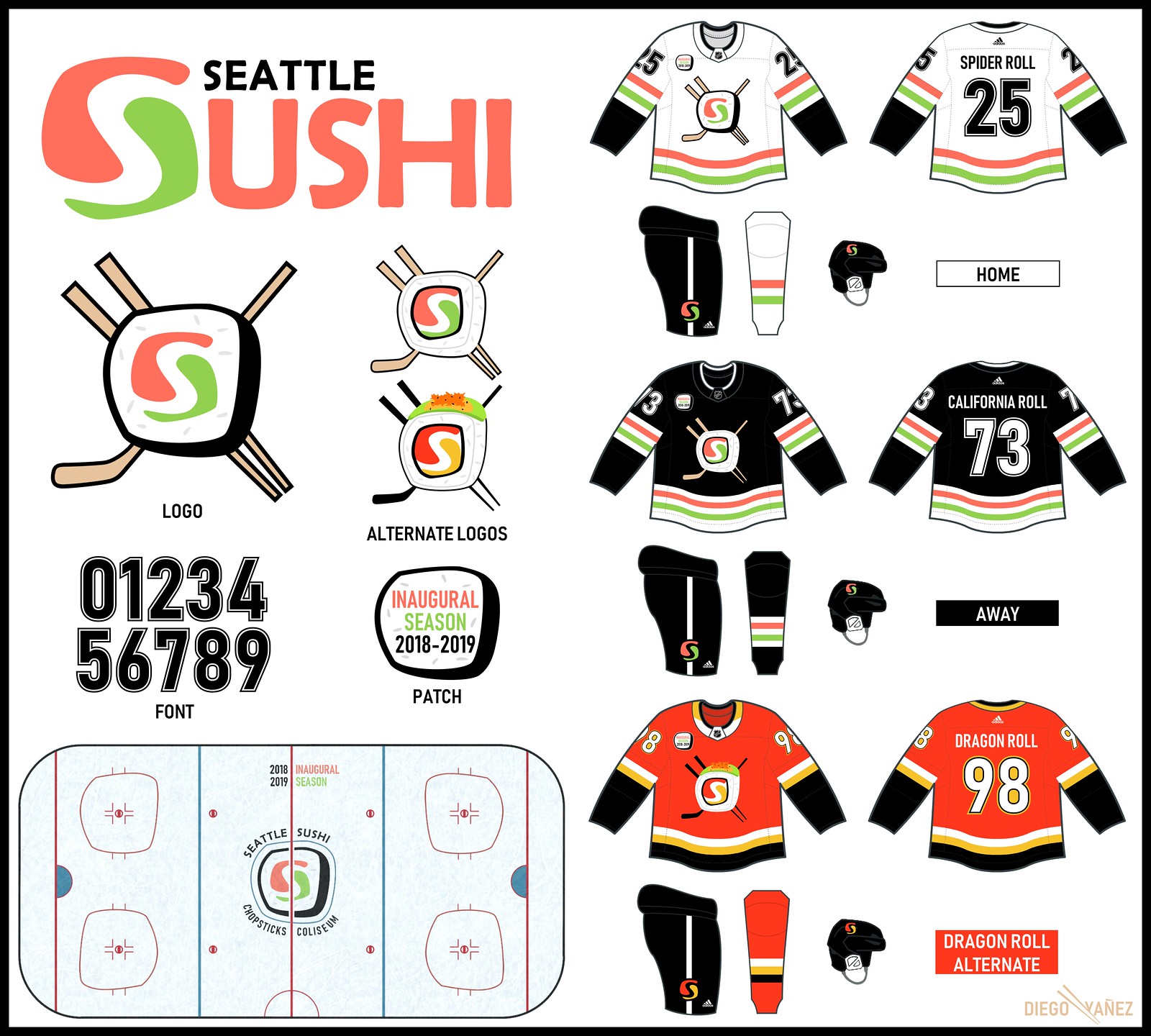 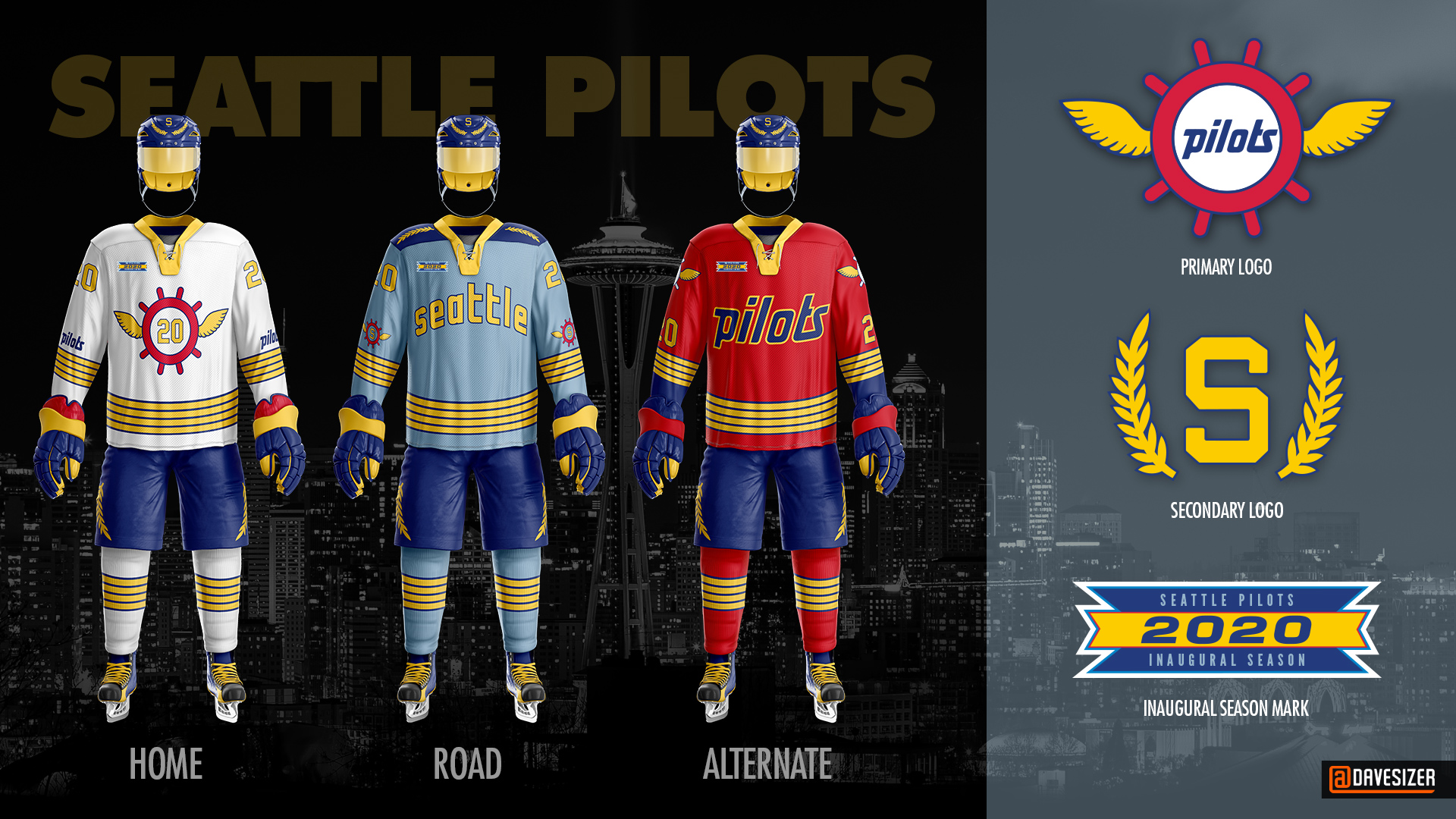 MLB's Seattle Pilots played only one season (1969) before moving to Milwaukee and becoming the Brewers. Several of our contest entrants revived the old Pilots team name, and two of them actually used the old MLB Pilots' uniforms as the basis for their designs. Again, it was hard to choose a winner in this category, but Dave Sizer went the extra mile by having his helmet design mimic the Pilots' old caps, and also repeated the cap/helmet trim on the pants and the road jersey yoke.

Very honorable mention goes to Tom Bierbaum, who came up with almost the same concept as Sizer -- and, as he always does when entering these contests, earned extra credit by also designing new uniforms for the opposing teams in his drawings, which in this case were the Capitals and Stars: 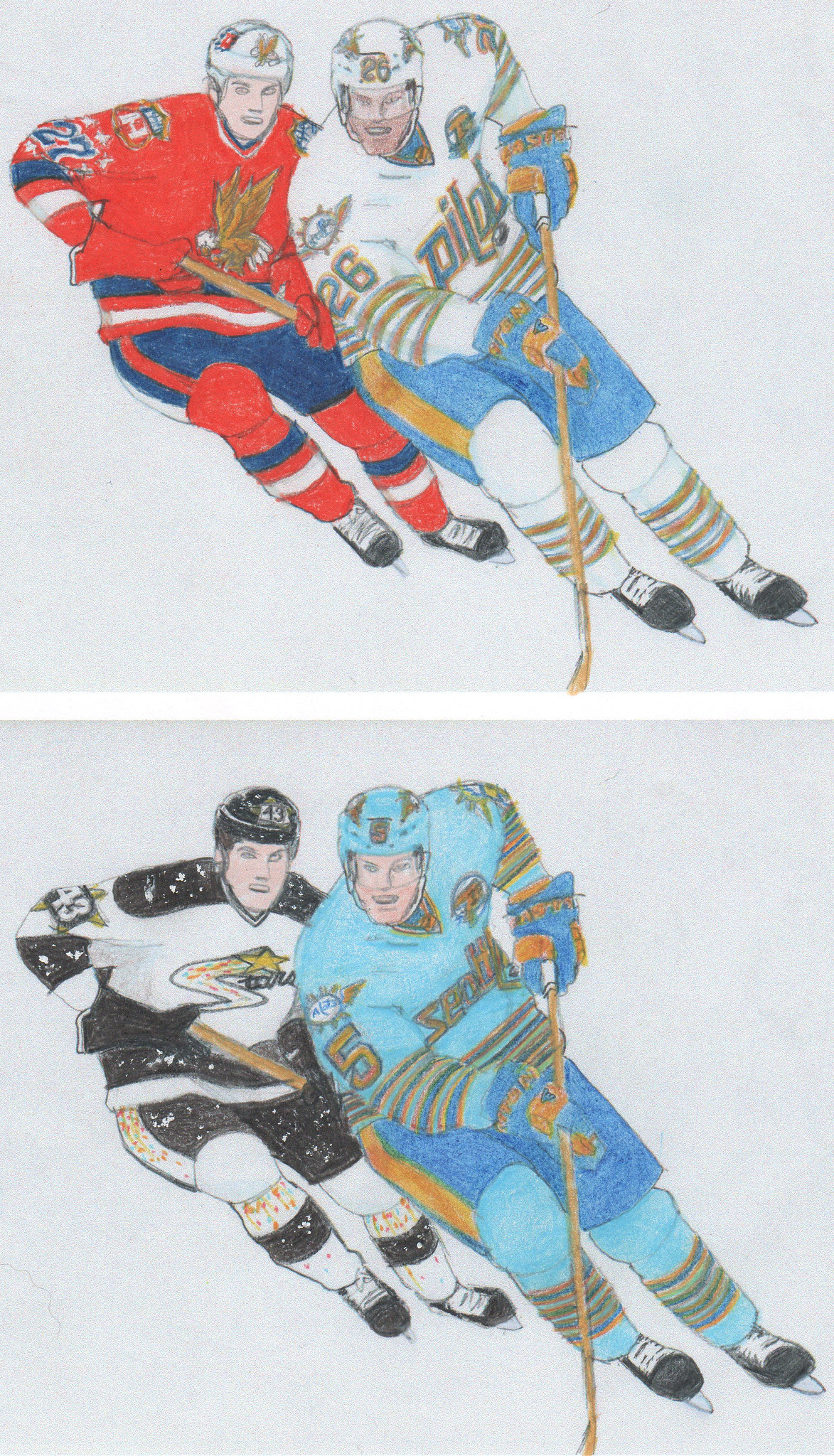 Jim Brewster, who designs under the pseudonym Sparky Chewbarky, submitted his design as a YouTube video -- only the second video entry we've ever received in the 14 years we've been running these contests. It's another Kraken concept, and a good one, but what really sets it apart is the video format. Remember, kids: Presentation counts!

Want to see more? You can check out all of the designs we received here.