Jared Cannonier was living in Anchorage, Alaska, and doing maintenance on air traffic control equipment for the Federal Aviation Administration. It was 2009, he was almost a year removed from serving in the U.S. Army and his wife, Cat, was pregnant with their first child.

"When we were in Alaska, we were cold and kind of eating for comfort," Cat recalled, "so that's when we really got heavy."

Fast-forward 10 years, and Cannonier is celebrating his second-round TKO of Jack Hermansson, who was ESPN's No. 6-ranked middleweight. A win should elevate Cannonier into the top tier of the division -- and this opportunity to headline a UFC card is the culmination of years of hard work and transforming his body.

Few could have guessed a 300-pound air traffic control mechanic would one day have a chance to prove himself as one of the best 185-pound MMA fighters on the planet. 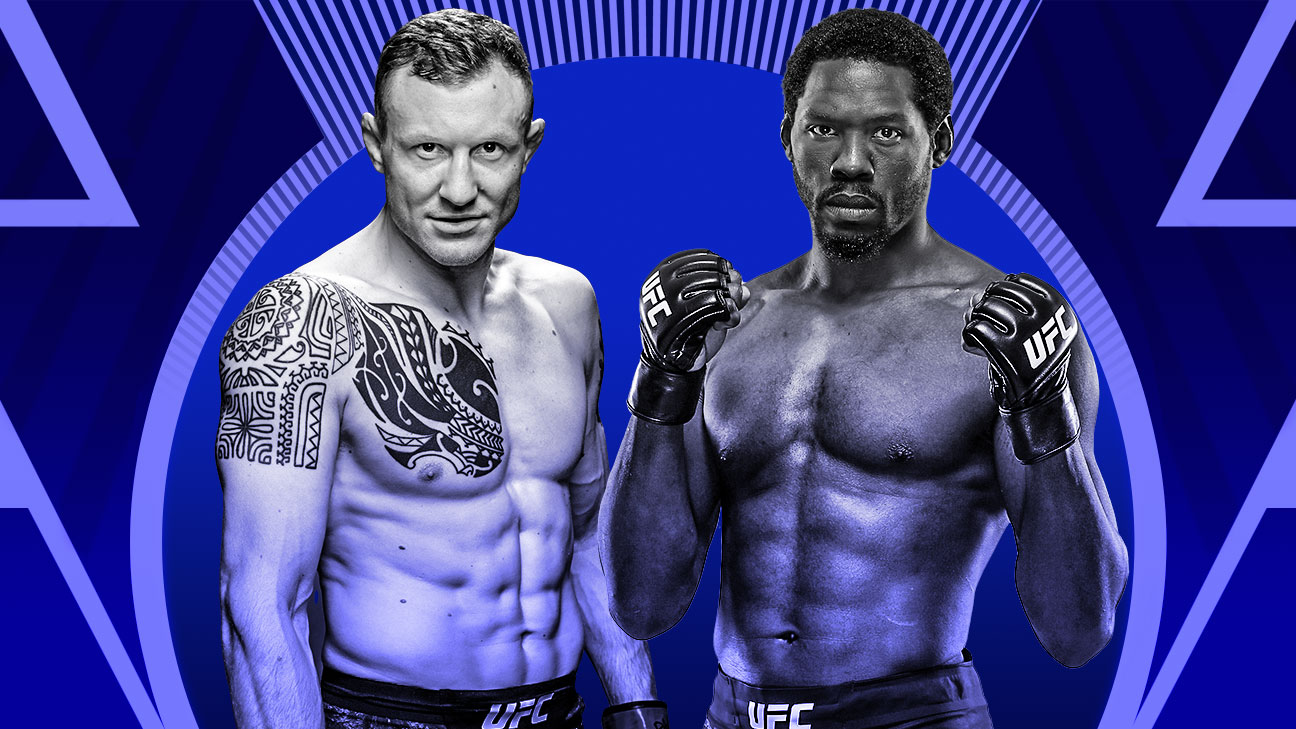 Every fight from UFC Fight Night: Hermansson vs. Cannonier is available to watch on ESPN+.

"When me and Jared first got together, he wasn't really that big," said Cat, who has been married to Cannonier for 12 years. "We were young, didn't have kids, he was swole -- in shape. He was around 225 pounds and had these massive, in-shape arms."

Cannonier's first foray into the world of mixed martial arts was through the Army's combatives training course. He was discharged from the Army three years into his service due to a positive drug test for marijuana.

Even as he searched for his next step and began working for the FAA to support his family, Cannonier knew he wanted to break into the world of MMA. He found a Brazilian jiu-jitsu gym in Anchorage and took his first professional fight in Fairbanks, Alaska, in 2011.

Then the UFC came calling.

Cannonier made his UFC debut as a heavyweight in 2015. His fighting weight peaked at 241 pounds at UFC Fight Night in Croatia in 2016, and despite earning a knockout and his first win in the UFC, Cannonier knew that his long-term prospects would be much better at a lower weight.

"I already knew when I was at heavyweight that I wasn't a natural heavyweight compared to the other guys I'd be competing against," Cannonier said. "I'm a realist. I'm not living in a fantasy. I know what's what. It was only a matter of time. I knew I had to make that happen."

"That" was a bigger commitment to training and a strict diet. In 2016, Cannonier was still living in Anchorage and working 10-hour days with the FAA when he made the decision to move down from heavyweight to light heavyweight. In order to reach his goal, Cannonier would get up at 3:30 a.m. and run or go to the gym and ride an AirDyne bike for an hour. Then he'd go to work before finishing the night by heading to his Gracie Barra gym to train in MMA.

After a year of that grind, Jared and Cat had saved enough money to move the family to Arizona. Cannonier started doing parts of his training at The MMA Lab in Phoenix, and he knew that's where he needed to be full time in order to take that next step as a fighter.

He moved down to light heavyweight (205 pounds) by the end of that year, but Cannonier's performances in that division were mixed as he went 2-3. As he concentrated on training full time, Cannonier continued to shed pounds.

Middleweight would be his next destination.

He debuted at 185 pounds in late 2018, and the move has already paid huge dividends. Cannonier has won two straight fights by TKO finish, and in May he earned a first-round TKO via leg-kick stoppage against UFC legend Anderson Silva at UFC 237.

At 5-foot-11, Cannonier no longer has to worry about a significant reach disadvantage against bigger heavyweights and light heavyweights.

While the volume of training was doing wonders for Cannonier's weight, he was also showing serious willpower in the kitchen. Cannonier doesn't have a nutritionist, and so Cat played a key role as his chef.

"A lot of these fighters, they have so many people working for them," Cat said. "We didn't get to have that luxury. We had kids by the time Jared started in on the MMA journey. ... Lucky for us, the adjustment came as an entire family. We were all kind of into it."

While fighting at heavyweight, Cannonier said he ate a lot of steak, potatoes, rice, chicken wings and Mexican food. During his training camps for middleweight, Cannonier eats some combination of fruit, avocado and oatmeal for breakfast; soups, salads, pasta or a light sandwich for lunch; and salmon or tuna fillets with broccoli, squash or spinach for dinner.

"I want to be completely vegan one day, but I've just gotta break the habits," Cannonier said.

When Cannonier's not in fight camp, Cat will still fry up some chicken for the family, but the more time Cannonier spends eating clean, the more he notices how much his diet impacts his performance in the gym

"Especially if I eat dairy, I feel more congested," Cannonier said. "I feel more fatigued after I've eaten steak. I feel heavy, a little bit more sluggish. ... After eating something for so long, your body becomes used to the side effects of them, and you really don't notice them."

Cat, who trains in MMA as well, said she actually enjoys when her husband is in training camp, because that means the entire family -- they now have three kids -- eats better. Before Cannonier's weight-division change, they ordered takeout more often.

Cannonier (12-4) said he weighs between 210 and 215 pounds during training camp and could get up to 230 outside of it. When he gets to the Tuesday before a Saturday bout, Cannonier said he weighs in the low 200s or high 190s, and the rest comes off via a typical water cut.

Despite how heavy he used to be, Cannonier still can't be considered a big middleweight. For instance, top middleweight Paulo Costa weighed 213.8 pounds on fight day at UFC 241 last month.

Still, any size difference pales in comparison to what Cannonier used to face -- and he seems to have found a home at middleweight. Saturday's fight against Hermansson proved how Cannonier stacks up against top-tier competition, and after the long road he traveled to get to this point, Cannonier is confident that he has the skill and power to move forward.