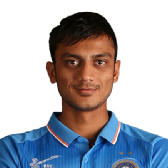 2.31pm And as Hardik Pandya picks up the winning team's cheque and collects the team trophy, it is time for all of us to say goodbye. A very successful tour of the Americas, and the team is now posing for a photo. Hardik passes the trophy to one of the support staff members to lift it and stand in the centre of the photo. However, don't go to sleep just yet India fans. India women are chasing down 162 for the Commonwealth Games gold in Birmingham, so hop over there to catch the finish of that match against Australia. See you!

First up, medals to the winning team from the sponsor representatives. Now winning captain Hardik Pandya: "Very special to get a chance to lead your country. And getting that chance and getting that victory means a lot to me as captain and an individual. I was just following our captain's roles. (Do you see yourself as permanent captain?) Yeah, why not? If I get an opportunity, I'll be more than happy to do that. We have a World Cup and Asia Cup now though, so we need to focus on that and use our skillsets there. (What makes India consistent?) The kind of talent the players have and the freedom we have. This is the new India how they are playing. They are expressing themselves well, and when you have freedom you get more dangerous. Credit to management and whole group to make that environment. They are not worried about whether they won't get picked or whether they will get dropped. (Ten wickets falling to spinners) I wanted to make sure I gave Axar the new ball and wanted him to get the confidence back and bowl dots. I knew the kind of bowler he is, when he bowls tight he creates chances. Then the wristspinners have some weapons that can trouble batters. I just hand to hand over the ball and told them to enjoy. (T20 World Cup in Australia - how close are India to being 100% ready?) Absolutely close. Just got to know how to keep getting better. Pressure and environment wise we are ready but in this sport you never stop learning. (Fans' role) It has been fantastic and I want to thank the fans who supported us. Didn't make us feel like we are playing abroad. Bohut badhiya, majamma"

Axar Patel is the Player of the Match for knocking back the first three WI wickets. He says: " My plan was to vary my pace. I knew wickets were slow. And tried to bowl stump to stump. The main thing is that I need to back my strength because in T20s batters try to hit you. So you just focus on bowling good areas and using your strength and your pace. The wickets felt similar to the ones I played in the Caribbean earlier on. The wickets for the one-dayers were similar, and then when I played the last two T20Is, it helped. I am an allrounder - doesn't matter batting or bowling. The day I bat well, I'll be a batting allrounder. The day I bowl well, you can call me a bowling allrounder."

Arshdeep Singh is Player of the Series for his seven wickets at an economy of 6.26. The crowd appreciates this POTS award decision. He says: "It feels really good and feel grateful to represent my country. Tried to keep things simple. As Rahul Dravid sir says we are a processed based teams so I stick with my process. I don't try to think much about other things during the bowling. The talk is to be adaptable. We have to do whatever the demand of the wicket and the team is. We do what the captain and coaches tell us. Credit to them for the clarity they have given me. I don't know what my greatest asset is but keeping things simple and focusing on process helps me. The way the captains back the youngsters, and the feel of the dressing room is very nice. Youngsters and seniors feel the same. Helps as a youngster to come in and repeat what you do with your IPL and state teams. My mentor and my competition is my dad, he is very economical and bowling well."

Losing captain Nicholas Pooran: "We weren't good enough. India came out aggressive, but as batters we didn't learn. As bowlers we are getting better, but we need to learn faster. It is a game of skills vs skills and today we weren't good. We didn't put partnerships together, except for Hetmyer. When you come against one of the top teams in the world then execution is important. We didn't come up trumps. As a batting and bowling team we have a lot to do. There's a lot of cricket to be played, lot of experience to be gained. Hope we learn as a team with these losses. We just won a series, we lost another series here, but we are building towards a World Cup and when we reach there we are ready to compete. (Holder opening the batting) King and Mayers weren't playing today. We gave him an opportunity today. We know how well he bats. (Invest in spin more?) In hindsight we could've played two spinners, something for us to think about. Both Hayden and Akeal are bowling well. Thank you to the fans in America."

Bharat : "@Sresth " knocking back Australia wickets?". I can understand your enthusiasm to get over with this game and join us for the exciting CWG final :)" -- Haha, apologies for that typo.

AJ: "A World Cup requires experience whether you are in form or not…there's a reason Kishan, Varun, R Chahar, etc. all failed at the World Cup. " -- Also conditions in the West Indies (or Asia, where incidentally the IPL is played) are vastly different to that in Australia. Bala: "How to Change West Indies Cricket within few days to world beaters? Simple Just don't give NOC for WI players for any T20 League and you will see incredible result DOT. No need for players/selectors/management/board change required." -- Bold idea. Don't see why they will be motivated to play for West Indies though. And barring Hetmyer and Pooran, nobody else in this XI are regular T20 journeymen. They have just been outplayed and in some games, they just didn't apply themselves with the bat in other encounters.

Afeef: "Hetmyer is Cricinfo's MVP. Goes to show how WI could've won if only Hetmyer was supported by the other batters." -- Good spot. We'll also have the presentations very soon.

2.05pm After those first two ODIs where the games were close and India perhaps were still getting used to these conditions, the other India wins have been clinical. 7-1 in the tour for India. If Hetmyer didn't get those lusty blows out in the middle overs, West Indies could've crashed to a sub-80 total even.

Abdul Rauf : "Non serious approach by West Indies batsmen. They are playing very casually, not caring for the country and fans who are disappointed. They should be fined for throwing away their wickets. Selectors and coaches should be changed. Players should be answerable for their unprofessional casual approach. "

2.02pm For the first time EVER in T20Is, all 10 wickets taken by spinners. Bishnoi and Kuldeep - the two wristspinners - share seven wickets between them, and "new-ball bowler" Axar Patel took three more. Hardik the captain finishes India's tour of the Americas with another win, India seal the series 4-1.

Some people felt that India may have left some runs out there with a lukewarm finish to their batting innings, but in the end, the gulf between the two teams is too big. Pooran leads the handshakes from the West Indies camp, and even though he is smiling greeting his familiar Indian friends, he must be extremely disappointed with the series result considering the kind of line-up India offered in this series. Could've been a 0-5 whitewash if it wasn't for McCoy's six-for in T20I #2.

Rahul Pathak: "Honestly, on current form, two of India's greatest ever - Kohli and Jadeja - don't deserve to be in the squad, let alone the playing XI. The alternatives are just very good. Of course, they will be in. Proven track record and World Cup being too close etc. But just saying "

Soumya : "Please some overs for Hooda. He needs to get some practice. Can be perfect back up for Virat with an extra highly necessary bowling option. India need 6 bowlers with one of them mostly having an off day." -- The game ended too quickly.

15.4
W
Ravi Bishnoi to McCoy, OUT, tosses it up on off. McCoy goes down on one knee, goes for the slog sweep, but mistimes it. High up in the air, and long on takes it. India win by 88 runs

Atleast West Indies reached triple figures before Hetmyer fell. No. 11 on strike now. Bishnoi won't get a better chance to take a four-for. This is already his best figures in T20Is. T20 best, however, is 4 for 15 that he can't achieve today.

15.1
W
Ravi Bishnoi to Hetmyer, OUT, full on leg stump. Hetmyer clears the front leg and tries to hit go over long off. But he's toe-ended the shot, and long off takes a simple one. A third for Bishnoi!

Kuldeep finishes with 3 for 12.

Praveen reddy: "4 wickets lost with only 1 scored between them. 5w not included. wow"

13.3
0
Ravi Bishnoi to Hetmyer, no run, full on middle, and big stride forward to defend

12.6
0
Kuldeep Yadav to Walsh, no run, good length outside off. Turning away, and cut past point. Enough time for one, but Hetmyer refuses. Double wicket maiden!