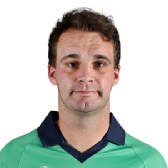 Ireland win by 2 wickets, wins the series and take 10 points to be 3rd on the Super League table. Almost a thriller in the end. Andy McBrine is the Player and Series of the Match. Thanks for tuning in, do join us for more cricket. I am Binoy George and along with Ranjith signing off.

Vern: "Congrats to the Irish on the series victory! Thanks for giving West Indies this beating at home, we fully deserve it. I've been a very loyal Windies fan but this is the last straw for me, time to abandon ship. "

Dipanjan Show: "It's 3:30 here and I accidentally let out a roar once Young hit that four. Think my parents have woken up, but it was worth it!"

Justin Smyth: "That's a fantastic series win for Ireland, although it's never an easy chase where Ireland are involved!"

Jave: "All Ireland has to do is not hit it the air and block the wickets. WI will give them 5 extras."