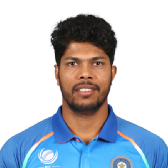 5:51pm And that is all from me today! Hope you enjoyed the coverage. Sidharth Monga and Alagappan Muthu will bring you all the post-match analyses today. From here, it's goodbye on behalf of Shashank and Raghav. Be sure to join us for the ODI series which begins from the 21st. Good night!

Virat Kohli: We didn't expect that in the morning. West Indies did really well to put pressure on us. Getting 50-60 lead was a bonus for us. We wanted more. But we understood how to create pressure and intensity with the ball. Didn't think a three-day finish was part of the plan. If you look at the three new guys who've come in, they've grabbed their opportunities. I think all these things are a big positive. But from this Test I want to single out Umesh. Shardul broke down and to take ten wickets is great. His energy in the field too. Outstanding performance. We're all happy for him. I think it's a great luxury to have [several seamers]. We have a headache to choose out of so many good quality bowlers. That's a better position to be in than looking for bowlers. I'm really happy to see these guys fit and hungry. It's up to the batsmen to do the rest of the job. I think this game was tougher for the batsmen. This first innings was more challenging than the last one. Jason coming in - he knows how to take wickets. Jinx has been batting really well, he got runs in Nottingham and we won the Test. He wanted runs under the belt. His 145 partnership with Pant is something we want to see more of.

P Shaw: It was a happy moment for me, finishing a game for India. It's a moment of pride. My first international series and winning it 2-0 with a MOTs award is a great feeling. Everyone is like a family now, it's not like a junior and senior situation anymore. I don't know what's happening next, I'm just enjoying this moment.

Prithvi Shaw is the Man of the Series.

Umesh Yadav: First of all, I want to thank my team-mates for giving me the support and confidence. I knew I was the only fast bowler in the team so I just went all out and gave it my best, tried to take five more in the second innings. It's always good to have healthy competition in the team. We're enjoying each other's company. We keep giving our best for each other and the team.

Umesh Yadav is the Man of the Match.

Jason Holder: Definitely a little disappointed with the batting. We fought our way back nicely after the first Test. Credit to the way India play cricket. In hindsight a lot of seamers got wickets, we probably would've gone with an extra seamer. Didn't spin as much as we thought. I think that's the thing - we need to apply ourselves more in batting. We need to give ourselves time. Personally I'm in a good headspace. I love playing Test cricket. It's my favourite format.

Nazim Ali: "That was a fair enough answer from the coach. He did the same on the SA tour with rohit selected ahead of Rahane based on form. Is Saha playing domestic cricket..??? I read that he will need 3-4 months to recover from his injury. "

Nilay : "Let me predict: Umesh Yadav the MoM, and Prithvi Shaw the MoS!!!"

Ankit Gusai: "Did Ravi Shashtri just answered Saha or Pant debate? He clearly said we will not look at past and go with the current form."

Pawas: "Well with that, Ravi Shastri just closed the door on Saha in Australia"

Varahan: "No doubt, Umesh has to be the MOM."

Ravi Shastri: Lot of positives. When we're playing at home it's easy to get complacent. We wanted to develop on the good habits. Being professional, closing out the sessions. You get a partnership and drive home the advantage. That sort of stuff.

It can be a frustrating profession when you sit on the bench like Umesh for 4 Tests. Only 11 can play. He got his opportunity here and I'm very happy for him. It's been done only four times (ten-for for a pacer in India). What this will do is make him believe that he belongs. He can say now that he wants his place. That's given us a headache. He was on target.

Shaw is born to play cricket. You can see the years he has already put in at the age of 19. I believe he's been playing since 8. That's already a decade. When I saw him first, he reminded a bit of Sachin, and a bit of Viru - and when he walks, there's a bit of Lara. If he can keep his head on his shoulders and keep the work ethic, he has a bright future.

I think [KL Rahul] will be fine. He's a world-class player. Sometimes he tries too hard. He works really hard on his game.

Pant is another name. He got his opportunity, he grabbed it, now he has consolidated it. [About Saha returning and challenging Pant] You've got to go on current form.

Rahane: It was good fun. Yesterday I was trying to control him. We needed one partnership to put WI down. It was hard to control him but he controlled his aggression and batted well.

I wanted to bat long and this innings really helped me. This series I wanted to spend time and create some good batting habits.

Throughout the series we've played really well, especially our batsmen. But credit to Umesh, we were a bowler short and he bowled magnificently.

Pant: I always wanted to play Test cricket and I've had a good experience. The team is very helpful. Everyone is helping me to grow in every sense and I'm taking it very well.

I need to grow a little as a cricketer and get more hundreds. The goal is to keep playing my normal game.

5:19pm Handshakes. A productive series for India. Some batsmen who needed form have found it, some with a point to prove have done that too. A deserved 2-0 win in a series that took less than six days to finish.

16.1
4
Bishoo to Shaw, FOUR runs, drilled through the covers to bring up a ten-wicket win and a clean sweep. It's been Shaw's series in many ways, and he hits the winning runs, using the turn from this full ball outside off and finding the cover boundary. Plucks out a stump too and acknowledges the camera as he walks off

Rahul playing for stumps like a good old-fashioned Test batsman.

15.6
0
Chase to Rahul, no run, length on middle stump, blocked to midwicket off the front foot

More teasing as Chase pulls out from him run up

Naveen: "Need to appreciate the Hyderabad crowed which came in good number to watch test match. I was there with my father yesterday and thoroughly enjoyed the match and atmosphere." --- Humble brag!

15.3
0
Chase to Rahul, no run, short of a length on off stump, pushed through flat. Defended off the back foot