PHILADELPHIA -- It was eerie how closely the ending of Eagles-Falcons Thursday night resembled the final moments of the divisional playoff game between these two teams in January.

The Eagles holding onto a small lead late in the fourth quarter. The Falcons knocking on the door. Fourth-and-goal. The game on the line. Everyone in the building knowing the ball was going to Julio Jones in the end zone.

“It was déjà vu all over again,” said cornerback Jalen Mills, who was on Jones the last time around, pestering the superstar receiver as Matt Ryan’s offering went off his fingertips and out of bounds to punch Philly's ticket to the NFC Championship Game.

It was a different play call Thursday. The Falcons went with an empty set, and had Jones in the slot instead of outside. But as safety Malcolm Jenkins said afterwards, all you had to know was that Jones was on the field and the ball was being thrown into the end zone. He sprinted to his left, and this time, Ryan and Jones connected, but cornerback Ronald Darby made sure Jones landed out of bounds. Ball game. Again.

“Definitely,” said Jenkins, on whether he felt history repeating during that Falcons drive. “But that gives you a little bit of comfort, because we’ve been here before, so nobody’s panicking, nobody’s worried or stressed. Just do your job, line up and play.”

The league might have a problem on its hands, because one of the top-rated defenses from 2017 is looking as ferocious as ever, and is oozing with confidence coming off a championship run that has armed them with valuable experience. 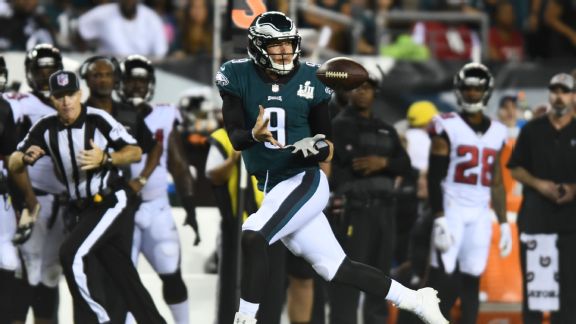 The defending champs raised a banner and some questions about their QB situation in a season-opening win:

It came up with a pair of goal-line stands Thursday, both to open and close the game, and held the Falcons’ high-powered offense to just one touchdown on five red-zone trips.

“We put a big emphasis on red zone. Our scheme is pretty simple. We’re really good at what we do, and we detail every small thing,” Jenkins said. “We trust our players, so when we get down to it, it’s nothing complex. We just do our jobs and trust our matchups. Obviously guys, they show up and it’s been crucial for our team.”

The Falcons were 4-of-15 on third down (26.7 percent). Ryan completed just 49 percent of his throws for 251 yards, zero touchdowns, an interception and a 57.4 passer rating. It was his lowest single-game completion percentage since 2011.

Ryan’s struggles are understandable: It’s hard to operate when there's a defensive front sitting on your lap. The Eagles sacked Ryan four times and registered an eye-popping 13 QB hits.

The chief disruptor was DT Fletcher Cox, whose impressive stat line (sack, tackle for loss, 4 QB hits) doesn’t do his performance justice. Cox’s goal this season is to be named Defensive Player of the Year, and he got off to a very good start.

“Fletcher is a... tremendous, tremendous player,” coach Doug Pederson said. “I think with the additions of [DT] Haloti Ngata, [DE] Michael Bennett, [DE] Derek Barnett in his second year, [DE] Chris Long, I think having everybody on that D-line, on that rotating basis, keeps guys fresh and keeps a little pressure off of Fletcher just a little bit. He's a strong, powerful guy, and he took [Falcons C Alex] Mack, the center, one time and got up under his shoulder pad on a move and got after the passer, and very disruptive in the pocket. Those are things that you like to see from your top players.”

Jim Schwartz’s defense ranked fourth in opponent yards (306.5), points per game (18.4) and takeaways (31) last season. While D-linemen Vinny Curry and Beau Allen and slot corner Patrick Robinson departed this offseason, he’s added a pair of proven vets in Bennett and Ngata along the defensive front, and now has the services of corner Sidney Jones and LB Jordan Hicks, who missed much of 2017 with Achilles injuries.

The defense is loaded with talent, has another year in Schwartz’s system under its belt, and now carries additional wisdom gained through its Super Bowl run. For at least the first week, it carried the weight as Pederson's offense struggled to get on track.

“I learned that we’re a group that can persevere, that can fight and can overcome some adversity and have some poise,” said Jenkins of his takeaways from Week 1. “I’ve seen teams, and that I’ve been on personally, that would, to make the amount of mistakes that we made against a really good team, that frustration can build up in the players and the coaches and you can just break apart because you don’t have the endurance to go a whole game. So I think we learned that we have that.”