The name wouldn't have mattered. Whichever of the top four offensive tackles the New York Giants selected with the No. 4 overall pick in the 2020 NFL draft would have naturally become the latest face of their perpetual offensive line rebuild.

It just happened to be Andrew Thomas. The Giants fell hard for the Georgia tackle, a player who was on their radar dating to last season when they were scouting Kentucky edge rusher Josh Allen for the 2019 draft.

The Giants insist Thomas was their choice all along, ahead of Iowa's Tristan Wirfs, Alabama's Jedrick Wills Jr. and Louisville's Mekhi Becton. Thomas wasn't the only pick, but he was the easy pick. 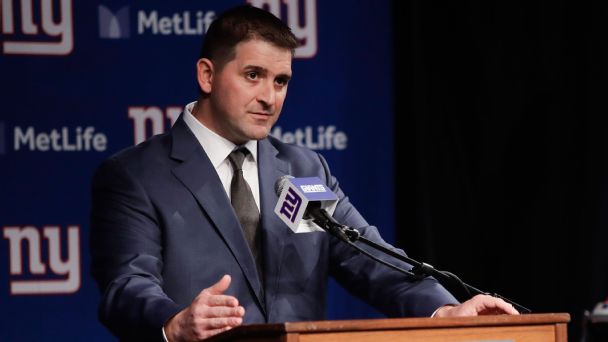 It was the beginning of a draft that showed how desperate the Giants were to fix a problem that has plagued the franchise since Super Bowl XLVI. Their offensive lines since have been anywhere from awful to average, and Thomas was their answer, regardless of whether defensive tackle Derrick Brown or Clemson's Isaiah Simmons -- two defensive players they had highly ranked -- were available.

Protecting their investments in quarterback Daniel Jones and running back Saquon Barkley were of utmost importance. In his third offseason as general manager, Dave Gettleman knew he needed to get this right after his offensive line whiffs of the past.

"We want to fix this offensive line once and for all," he said after the first round.

The Giants started with Thomas, but that was just the beginning. They took Connecticut offensive tackle Matt Peart in the third round and Oregon guard Shane Lemieux in the fifth. Peart is a bit of a development project with starting traits. Lemieux has toughness and grit that would have fit with those Super Bowl offensive lines. Coach Joe Judge said the plan is to train Lemieux at center, which would thrust him into the starting mix as early as this season.

Even the Giants' biggest financial commitment to an undrafted free agent went to Rhode Island offensive tackle Kyle Murphy. He was given a $12,000 signing bonus and had $85,000 of his base salary guaranteed. It shows the Giants really wanted Murphy after a draft that saw them select three offensive linemen in the first five rounds for the first time in the common era.

"This was a very talented draft class, especially on the offensive line," Judge said after the selection of Thomas. "This is definitely one that we think is going to give us a chance to come in and improve us overall."

The pressure falls immediately on Thomas, the highest-selected offensive lineman by the Giants since John Hicks was taken third in the 1974 draft. Thomas is expected to fill a void at tackle (whether it's on the right or left side is still to be determined) and be the eventual blindside protector for Jones. As for Lemieux, two scouts told ESPN they were unconvinced he's ready to start.

"Not sure if he's quick enough," one scout said.

There is no doubt with Thomas. Both scouts considered him the top lineman in this draft.

The Giants are confident they have the right guy as well. They saw it on tape against some of the nation's best pass-rushers, having publicly acknowledged that matchups with LSU's K'Lavon Chaisson, Notre Dame's Julian Okwara and Allen (in 2018) played a large part in their evaluation of him. They also believe Thomas has the talent and temperament to handle the demands of being such a high draft pick in the New York market.

Thomas' high school coach, former NFL All-Pro linebacker Chris Slade, raved about his pupil's steady demeanor and work ethic. He relayed that to the Giants during a phone call he received in the days leading up to the draft. A member of the personnel department asked if there was any reason Thomas shouldn't be the No. 4 overall pick.

"I said, 'Absolutely not!'" Slade said told ESPN, adding it was an easy assessment. "You have an opportunity to take Andrew Thomas, you have to take him."

Slade knows. He coached Thomas for four years at Pace Academy in Atlanta, where they won the school's first state title in 2015.

It was at Pace where the former Patriots star provided a taste of what Thomas is about to encounter with Judge, who spent eight years under coach Bill Belichick in New England. Slade played under Bill Parcells and Belichick. He preaches the same basic tenets, and even uses similar verbiage and terminology.

"I think his temperament and the way he approaches things -- he's a young man of faith -- I think he's the right person for it," Slade said of Thomas. "His attitude will be the same every day. He'll prepare. He'll practice hard. He'll study.

"Will he get beat? Will he give up a sack here or there? Hopefully not, but it's going to happen. The old saying in the NFL, 'Those guys get paid, too.' He's going to have those kind of Sundays. Playing in the SEC and playing against some of those top pass-rushers, the Bamas, the LSUs of the world, the Floridas, the big bowls and stages he's played on, I think that has helped him prepare for this moment. I think that was a very attractive thing that the Giants personnel looked at."

Minimizing risk was always a priority when it came to the No. 4 pick. It made the Thomas selection easy in the end, with Gettleman under pressure to get this right.

The GM earmarked the offensive line as a problem the day he was hired and promised to fix it at his opening news conference, much like he did 846 days later after selecting Thomas. The first two years of offensive line reconstruction weren't good, and the Giants entered this draft with gaping holes at tackle and center. Most of Gettleman's moves to date have flopped.

His biggest move, the signing of Nate Solder (four years, $62 million), has far from solidified left tackle, as Solder has struggled in his first two years with the Giants. It would be a surprise if he lasted beyond this season and into the final year of his deal. Hence the desperate need for Thomas.

Then there was the disaster of free-agent guard Patrick Omameh (cut midway through his first season), the attempt to salvage something of Ereck Flowers as a right tackle, and the failure to ever fully address the center position. Even left guard Will Hernandez, a second-round pick in 2018, failed to progress as expected last season.

The lone unequivocal Gettleman hit with the offensive line has been the acquisition of right guard Kevin Zeitler in a trade last year from the Cleveland Browns. But that still leaves Gettleman's O-line mission unaccomplished.

One year after selecting Jones at No. 6 overall, his last-ditch effort was the draft.

Thomas is the most important piece added to the offensive line since Gettleman's arrival. He is now the face of a group that will be under scrutiny until the Giants get it right -- with or without Gettleman.