MIAMI -- The Miami Dolphins will enter the 2020 league year with more resources than any other team to improve their roster. It starts with a projected $100 million in salary-cap space after expected cuts and ends with 14 projected draft picks, including three first-round selections.

But before the Dolphins figure out whom to add there will be conversations about which players remain. This Dolphins front office has made it a priority to clean up its salary cap, collect assets and make roster-building decisions to fit coach Brian Flores' team. 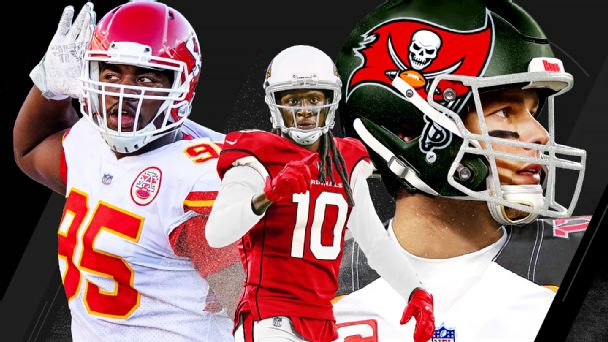 Here's a look at six players the Dolphins will have to make decisions about this offseason and our early prediction on whether they stay or go:

2019 stats: 27 tackles, one tackle for loss, one pass deflection in four games

Jones is the Dolphins' longest-tenured player and a two-time Pro Bowler, but his time in Miami is nearing an end. There were trade talks last offseason, but his cumbersome guaranteed salary prevented the Dolphins from getting much value, and now there's an easier out that could spell his end with the Dolphins via trade or release.

A 31-year-old safety who has had major surgery on both shoulders coming off an injury-plagued 2019 does not fit the rebuilding Dolphins' plans. A restructured contract could be considered because of the massive amount of dead money, but the Dolphins want to clean up their cap -- not make it messier -- and it's probably best for both sides to move on.

Wilson has been plagued by injuries throughout his Dolphins tenure, but he started to flash some of his old healthy self in December, gaining 197 of his 351 yards over his last three games. The Dolphins' receiving corps led by DeVante Parker and Preston Williams is their strongest unit, and Wilson -- who wants to return -- fits well as a slot No. 3 receiver.

Still, it's unlikely Wilson returns at a $9.5 million salary. A restructuring of his contract to chop that number down might work, but the Dolphins might also choose to move on given Wilson's injury history. There's no deadline for this deal nor the Jones or Daniel Kilgore contracts, creating the option for Miami to take it into training camp, but agents and players would probably prefer clarity sooner.

Verdict: Take a significant pay cut to stay or be released

Kilgore is an interesting case. He was a strong veteran leader and captain for a 2019 Dolphins team that needed direction. His play was up and down, and Miami figures to examine upgrades in the draft, but he's currently the best center on the roster and doesn't cost much. If they find an upgrade, it'll be easy to dump Kilgore. But for now, Kilgore remains and might do so until at least the start of the season.

Verdict: Stay for now but could go at waiver cut time if beaten out by a rookie

Assuming Ryan Fitzpatrick returns in 2020 and the Dolphins draft their franchise quarterback in April, Rosen would be a third wheel in Miami. The Dolphins seemed to decide in early October they had seen enough of Rosen and didn't view him as a long-term starting option. Rosen is young and inexpensive, so Miami could keep him and continue to develop him, but it might be better for Rosen if another team takes a flier. It would likely only cost a late Day 2 or Day 3 pick at this point.

Verdict: Go, via trade if Dolphins draft their quarterback of the future

There's nothing that forces the Dolphins to make a decision on Harris before Week 1 of the season, but if there's any way to get value out of their former first-round pick via trade, it might be a route worth examining. Harris hasn't made much of an impact despite plenty of opportunities in his first three NFL seasons (3.5 sacks in 41 games). The Dolphins may give it one more training camp run, but there have been no signs a turnaround is coming.

Verdict: Go if a trade partner is found, possible waiver cut if none found

Grant signed a four-year extension in August, so he barely belongs on this list, but he's here because of his injury history and the fact his contract has an out this offseason. Grant has missed six games in each of the past two seasons, but he's still the fastest player and one of the team's most explosive athletes. He said at the Super Bowl that he'll be healthy for OTAs and to expect a bounce-back season. Our bet is Miami bring hims back as a returner and No.4/No.5 receiver.