But Brockers hardly paid his defensive line counterpart any attention, as he continued to explain why he wanted to play in a Los Angeles Rams preseason game.

"The third preseason game is always a good game just to kind of gauge where you're at," said Brockers, a seven-year NFL veteran. "You want to get that feel, that speed of the game, because you get into these practices and, you know, we can ramp it up and go fast, but it's nothing like when those lights are on and you've got the crowd."

Donald shook his head. "No, hell no," the two-time NFL Defensive Player of the Year said.

Still, Donald wouldn't have it.

Neither has Rams coach Sean McVay, who opted to sit not only his starters but several key reserves throughout the preseason schedule.

To Play or Not to Play 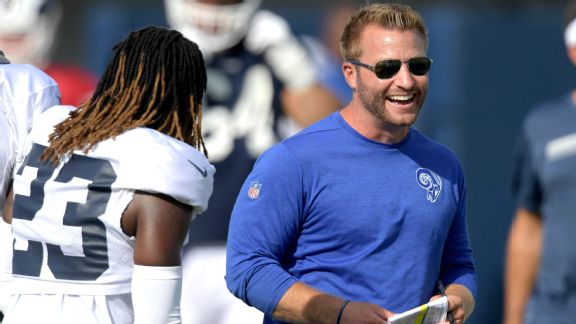 In fact, McVay went so far to preserve his top playmakers, that he did not take them to a Week 2 preseason game against the Dallas Cowboys at Aloha Stadium in Hawaii.

"That was cool, I was dreading that," Brockers said. "Definitely happy coach looked out for us and we didn't have to go."

In lieu of a six-hour flight across the Pacific Ocean, on the heels of a trip to Napa where they held two joint practices against the Oakland Raiders, starters and key reserves remained in Los Angeles, where they worked out and enjoyed time to themselves -- a rarity in the middle of training camp.

"I was just relaxing," said cornerback Nickell Robey-Coleman, who hosted a cookout at his home, where he watched his teammates defeat the Cowboys on a 65-inch curved television. "Chillin', got a couple massages, went to the beach. I was kickin' it."

So was running back Todd Gurley. "Just chilled out at the house, relaxed," Gurley said. "Had to come up here one day, but other than that, just relaxed."

McVay's preseason strategy is similar to what he employed last year, when offensive starters sat through the preseason's entirety and defensive starters played only two series (The results: A three-and-out and intercepted pass).

Pundits raised their voices and opponents raised their eyebrows, until the Rams won 13 games, a second consecutive division title, the NFC championship and advanced to Super Bowl LIII.

"There is a lot of merit to playing in [preseason] games, where you're actually playing real football," McVay said, adding, "But where we're at, we feel good. … You always want to try to keep players as healthy as possible, especially going into Week 1."

The Rams will open the season against the Carolina Panthers on Sunday, mostly healthy -- with exception of a few players who encountered serious injuries, McVay's greatest fear, in the preseason.

Micah Kiser, a projected starter at inside linebacker, was one of only a few key players who participated in preseason games as he competed to win a role. He was on track to start alongside Cory Littleton, until he suffered a serious pectoral injury in Week 2 of the preseason and underwent surgery. He will be sidelined indefinitely.

Linebacker Josh Carraway and offensive lineman Aaron Neary, both competing for a roster spot, suffered a torn Achilles and a fractured ankle, respectively, in Week 3 of the preseason. Carraway is out for the season and Neary is out indefinitely.

"You never want to see your main guys that you're counting on get injured, especially in games where it's really just tune-ups for the regular season," McVay said.

Many of the Rams' players, who had grown accustomed to two-a-days and playing in at least three preseason games over the course of their careers, never thought they'd be told to sit out the entire preseason.

Complaints are few and far between.

"It's about being healthy," said Donald, who was named the NFL Defensive Player of the Year the past two seasons despite not only sitting out of the preseason, but holding out of training camp altogether because of a contract dispute. "You can still get great work, we've been doing some great stuff at practice, we had the scrimmage today against each other, so we're still getting a feel for it but our main goal is to keep each other healthy."

Early in training camp, the Rams participated in two joint practices against the Los Angeles Chargers. Less than a week later, they held two more combined workouts against the Raiders before the preseason opener.

Often at practice, starters will face off against starters, rather than against the backups. And the effort tends to increase, with knowledge that their best work must happen in a controlled environment, rather than in a preseason game.

Safety Eric Weddle, who signed as a free agent last March, said there was plenty to gain from joint practices. Still, the 12-year NFL veteran said there was nothing quite like playing in a game.

"I'm sure the first couple of quarters, or maybe even a game, my timing will be a little off, but it will come back fairly quickly, so just timing for tackling and stuff," Weddle said.

Even if there was a slow start, the benefit toward the end of the season, and into the playoffs, could be worth it.

"It's definitely a help on the latter part of the season when you know you're going into Week 14, Week 16 and you practically have saved your reserves up from the four weeks that you had in preseason," Robey-Coleman said. "You feel that on the back end."

Sitting out the preseason might not be for everybody. But, at least for now, it's how McVay's team will roll.

"It works for us," quarterback Jared Goff said. "It worked for us last year. It's part of Sean's philosophy and I enjoy it."