THOUSAND OAKS, Calif. -- The evidence was rarely seen on the field.

Yes, the Los Angeles Rams participated in the 2018 NFL draft. But no, none of the 11 players selected played a significant role in their Super Bowl run.

In fact, the Rams' first-year players last season participated in the fewest offensive and defensive snaps among rookies across the league.

But as preparations begin for the 2019 season, with a roster capable of another deep playoff run, several of the Rams' lesser-known prospects drafted a year ago will need to step up. Some, perhaps, in a major way.

"You try to stay ahead of the curve," Rams general manager Les Snead said, as he reflected on the 2018 draft.

With five months, and still several transactions to be made -- including the 31st overall pick on April 25, followed by six more selections -- it appears the Rams have effectively done just that. Despite a few key departures on the offensive and defensive lines, the Rams won't be left scrambling to fill those voids.

Among the Rams' 11 selections last year, here's a look at five players who could be significant contributors, if not starters, in 2019:

Round 3, No. 89 overall: Joe Noteboom, OT, TCU: The Rams selected Noteboom with the foresight that they could lose left guard Rodger Saffold or left tackle Andrew Whitworth in 2019. Saffold, the team's longest-tenured player, signed a lucrative deal in free agency with the Tennessee Titans, and much to the Rams' relief, Whitworth opted to forego retirement to return for a 14th season.

Noteboom's development received rave reviews from the coaching staff throughout the season and he is penciled in as Saffold's replacement, though that could change given an upcoming first-round pick.

"Joe would be the heir apparent at this particular time," Snead said. "Now you could go into the draft and all of a sudden you draft a guard at 31, maybe that's the starter and Joe's the third tackle, which is still very valuable."

The 6-foot-5, 320-pound Noteboom played only 77 offensive snaps as a rookie, but started throughout the preseason and received significant practice reps because of the rest schedules of Saffold and Whitworth.

Round 4, No. 111 overall: Brian Allen, C, Michigan State: The Rams did not pick up the second-year option on veteran center John Sullivan's contract, which leaves the position to Allen, who spent last season learning from the savvy vet.

Allen, 6-2 and 300 pounds, played 35 offensive snaps as a rookie, but like Noteboom, started throughout the preseason and received a significant amount of practice reps because of Sullivan's rest schedule.

"When you do draft those two players it is eventually with the anticipation that they can become and ascend into a starting role," coach Sean McVay said. 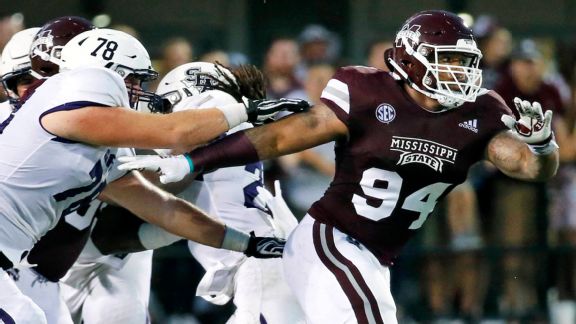 Rams will draft a defensive lineman, but will it be at No. 31? Story

Round 4, No. 135 overall: John Franklin-Myers, DE, Stephen F. Austin: Franklin-Myers received the most playing time among rookies last season with 283 snaps on defense. He also produced a game-changing play when he forced quarterback Kirk Cousins to fumble late in the fourth quarter of a Week 4 victory over the Minnesota Vikings.

Franklin-Myers' presence, coupled with the versatility of veteran defensive lineman Michael Brockers, could lessen the blow from the departure of defensive tackle Ndamukong Suh, who is not expected to re-sign in free agency because of budgetary constraints.

It remains an option that Brockers moves to nose tackle, the role filled last season by Suh, while Franklin-Myers fills the void at five-technique.

Round 5, No. 147 overall: Micah Kiser, LB, Virginia: If the season were to begin tomorrow, Kiser would fill a starting role at inside linebacker after the Rams released veteran Mark Barron to save $6.33 million in their salary cap, though Snead has said that position remains in flux.

Kiser did not play on defense last season, though he was a significant contributor on special teams.

Round 6, No. 195 overall: Sebastian Joseph-Day, DT, Rutgers: Joseph-Day remains a work in progress and was inactive throughout the regular season and postseason. However, he remains in play to take over at nose tackle. "We do like Sebastian and would like to continue developing him," Snead said.