Rams Jared Goff proved he can duel with any QB, even in a rematch with Drew Brees
2yLindsey Thiry
'Way more important than any play I can make': Rams' Jalen Ramsey steps up for Nashville charter school
2hLindsey Thiry
Best bets for Monday Night Football: Bears at Rams
14hNFL Betting Insiders
Strengths, weaknesses for the NFL's top 12 Super Bowl contenders
3dAaron Schatz
Rams out to prove vs. Bears that Week 6 clunker was a fluke
4dLindsey Thiry
Calif. to allow fans at outdoor pro sports events
6d
49ers remind Rams that NFC West is not the NFC East
7dLindsey Thiry
Rams' Aaron Donald looks like trouble for 49ers
8dESPN
Rams' Sean McVay remains a football junkie even as he attempts to step back
12dLindsey Thiry
Rams put rookie Fuller on IR with shoulder injury
13dLindsey Thiry
Rams have a sack party in Washington as they prepare for NFC West
14dLindsey Thiry
Nov 20, 2018

LOS ANGELES -- Jared Goff appeared calm, though the Los Angeles Rams quarterback had every reason not to be.

The Rams trailed the Kansas City Chiefs by four points, with less than two minutes remaining in a Monday Night Football showdown in front of a raucous crowd at the Los Angeles Memorial Coliseum.

But there stood Goff in the shotgun formation at the Chiefs’ 40-yard line, cool as could be.

Goff took the snap, made a quick drop and then delivered a 40-yard strike to tight end Gerald Everett, who slipped a tackle and tightroped his way into the end zone for the go-ahead touchdown in the Rams’ 54-51 victory.

“He was awesome, I thought especially on the last drive,” Rams coach Sean McVay said of his third-year quarterback. “They dropped the safety down in, he put it up and down and then Gerald ends up just right down the sideline, not stepping out of bounds.”

It certainly wasn't the first time in what has been not only a true breakout year for Goff, but an MVP-caliber one. He has thrown for more than 320 yards in five games this season, including Monday night's win.

Everett, a second-year pro from South Alabama, expected the ball. “In the huddle, Jared kind of gave me the look and I knew I was going to run full speed,” Everett said. “He knew it, too.”

McVay handed out five game balls in a celebratory locker room, as the Rams improved to 10-1 going into a bye. One game ball went to Goff, who passed for 413 yards and four touchdowns, and another to Everett, who caught three passes for 49 yards and a career-best two touchdowns.

McVay also gave game balls to outside linebacker Samson Ebukam, who scored two touchdowns, and linebacker Ramik Wilson and cornerback Marcus Peters, who both previously played for the Chiefs.

“It was a crazy game, crazy game,” Goff said. “It seemed like at the end, whoever had the ball last was going to win. That's what it felt like.”

The Chiefs and Rams combined for 105 points, the third most in a game in NFL history and the most in the history of Monday Night Football, according to ESPN Stats & Information research. The Rams scored 21 points off turnovers, while the Chiefs scored seven.

With 10:47 to play, Goff completed a 27-yard pass to Josh Reynolds, then a 36-yard pass to Robert Woods. But consecutive incompletions led to a third-and-7 situation, and Goff delivered to Everett, who caught all three passes thrown to him in the fourth quarter. Going into Monday night’s game, Everett had only three fourth-quarter catches in his first 26 career games. 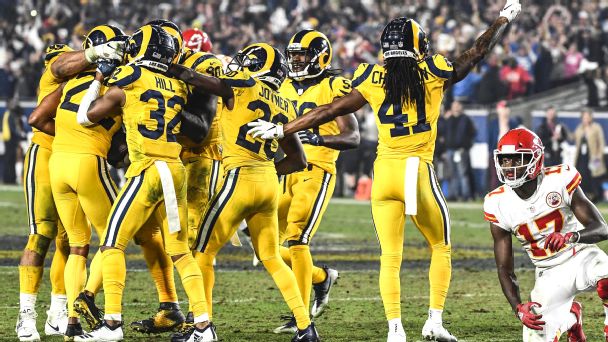 Chiefs-Rams lived up to the hype in a back-and-forth, wildly entertaining, 54-51, points-apalooza.

“We were calm, not pressed, not pressed about the time, we knew we had enough time,” said Woods, who caught four passes for 72 yards and a touchdown. “Just patient, working, and taking what they give us, and they gave us the home run.”

With go-to receiver Cooper Kupp sidelined for the remainder of the season after undergoing surgery to repair a torn ACL, and Todd Gurley II largely ineffective or unused, Goff utilized every other playmaker available and completed passes to seven different targets.

“Gerald and Josh stepped up big,” Goff said. “It seems like every time we need it, someone does and those two were huge today. Just seeing their progression and the players they’re starting to become is exciting.”

But after the Rams fell behind in the fourth quarter, it was Goff’s ability to perform under pressure that brought them back.

The Rams will still need some help to take home-field advantage from the New Orleans Saints, who beat the Rams two weeks ago. Goff threw for 391 yards and three scores in that meeting in New Orleans. If another meeting with Drew Brees comes, the Rams are even more confident Goff can continue to go toe-to-toe with any QB.

“Jared’s poise and confidence and ability to respond after it wasn’t always pretty, especially in some instances, is why you love him,” McVay said. “And why he’s such a great quarterback because of that even-keel demeanor and disposition and that poise that we always talk about.”