KANSAS CITY, Mo. -- Defensive coordinator Steve Spagnuolo looks at what he's trying to accomplish with the Kansas City Chiefs and at times sees eventual success. At other moments, he seems overwhelmed by the process.

"I've been through this first-year thing a number of times," said Spagnuolo, a veteran defensive coach. "Sometimes it's gone really good, and sometimes it hasn't gone so good."

In 2019, the Chiefs are facing the unknown with an overhauled defense filled with new stars and new coaches. Nobody, not even Spagnuolo, is certain how it will work out.

But the Chiefs had to try something. Their defense was that bad last season.

The Chiefs went 12-4, won the AFC West for the third straight year and won a home playoff game for the first time in 25 years, but further success was wasted by the defense. In his first year as a starter, quarterback Patrick Mahomes threw for 5,000 yards and 50 touchdowns and won the league's MVP, but in the end, it counted for nothing when the defense collapsed in the AFC Championship Game against the New England Patriots. 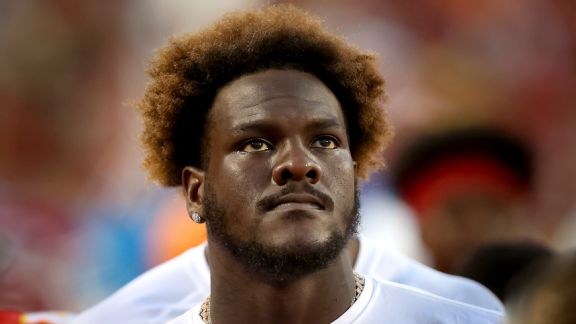 Frank Clark, above, is in, while players such as Justin Houston, Dee Ford and Eric Berry are out:

The Chiefs weren't interested in a repeat of that performance, so they reconstructed their defense. They hired Spagnuolo and a new defensive staff. They changed defensive systems, switching to a base 4-3. They acquired as many as seven players who will be defensive regulars, including end Frank Clark and safety Tyrann Mathieu.

It's a lot of change in a very short period, but the Chiefs thought they couldn't afford to wait.

"It was a little ambitious and aggressive, but that's the mode we operate in," general manager Brett Veach said. "We have a great offense, and we want to take advantage of that every year and while they're all young and healthy and playing at a high level.

"Offense, especially with coach [Andy] Reid, is an execution deal, and it’s timing and precision. It’s reps upon reps upon reps. Not to say that defense isn’t, but defense is more of a mindset and a temperament. So you want to bring in guys that are going to come in and get other players to respond to them."

Reid took only hours after the AFC Championship Game loss to decide to turn over the defensive staff, led by long-time coordinator Bob Sutton. He resisted a similar change the year before out of respect for Sutton's abilities and instead focused on fixing defensive problems by changing players. The Chiefs brought in five veterans and drafted defensive players with their first five picks.

"Our first three, four years, I thought we were really good on defense," said Reid, who joined the Chiefs in 2013. "It kind of carried us for a little bit."

Last year's changes didn't work. The Chiefs got old on defense. They received almost nothing from safety Eric Berry, who was injured for most of a second straight season.

The Chiefs finished last season 31st in total defense, ahead of only the 6-10 Bengals.

"Sometimes change can be good. It can be healthy if handled the right way. Spags is a veteran coach. Bringing people in that worked with him or were familiar with his system was a good get there and important."

The Chiefs might not have attempted such bold defensive turnover if they were starting a staff from scratch. But Spagnuolo worked eight seasons for Reid with the Eagles as a defensive assistant. The Chiefs hired four other new defensive coaches. All had played or coached with Spagnuolo.

"The good thing was that there was already a rapport between Spags and Andy," Veach said. "I had spent some time with Spags in Philly. So when he came in, we were speaking the same language and were able to effectively communicate."

The next step was a significant player overhaul. The Chiefs cleared out Berry and other longtime veterans such as Justin Houston, Allen Bailey and Dee Ford, who had 13 sacks last season but was thought to be unfit for the new system.

Some players survived the purge, most notably Chris Jones. With 15.5 sacks last season, Jones emerged as one of the NFL's top defensive linemen.

Cleaning up an underperforming defensive roster was the easy part. The Chiefs also had to add, and the first piece, Mathieu, was costly. He signed for three years and $42 million, making him at the time the highest-paid safety in the league.

To Veach, Mathieu was essential to the process. In Berry's absence, the Chiefs suffered at safety. The team rated Mathieu higher than any of the other available free-agent safeties, including Earl Thomas and Landon Collins.

From the moment he walked through the Arrowhead Stadium doors, Mathieu became the Chiefs' defensive leader, the player others looked to for guidance.

"The expectations are high, especially with our football team, especially with the defense just trying to set a standard," Mathieu said. "It starts with Spags. He's won some championships. He's put some great players in the Hall of Fame, with a few more to be inducted.

"The sky is the limit, but it's going to be a tough hill to climb. It won't be easy. It's a new scheme for all of us, so there's going to be some valleys in there. I think that's why I'm here, to kind of keep guys up, to keep their spirits right. I think we'll be all right."

But their other major acquisition came in the days before the draft. Clark had 13 sacks last season for the Seahawks.

The Chiefs kept an eye on Clark for months, identifying him as a possible free-agent addition. The Seahawks effectively kept him off the free-agent market by making him their franchise player. That necessitated a trade.

"We were in dialogue with Seattle for a long time," Veach said. "They had some things they had to work through with [Russell Wilson] and [Bobby] Wagner. I felt the longer it went on, the more they were thinking about it. The dialogue early on was always, 'Let's stay in touch.' That was a positive sign to us, encouraging to us."

Veach wouldn't let a possible deal die. The trade was reached when the Chiefs sent a first-round pick to the Seahawks and signed Clark to a five-year contract worth more than $100 million.

Clark played on a top-five defense in his first two NFL seasons with the Seahawks in 2015 and '16.

"The first step [for the Chiefs] is creating that competitive atmosphere," Clark said. "Just being brutally honest, it wasn't here on the defensive side last year. When you look around, you see total defense, and we ranked 31st in the league. That doesn't make anyone proud. As a fan, as a coach, as a player, you shouldn't be proud. ... We're coming in here with a whole different type of attitude. We're coming here to win, we're coming here to compete, and we want to be the best.

"It's just that time for the competitors to come out and compete and for everyone else to fall off, I guess."

"The first step [for the Chiefs] is creating that competitive atmosphere. Just being brutally honest, it wasn't here on the defensive side last year." Frank Clark

The Chiefs feel good about their defensive line, where they have not only top-end players in Clark and Jones but depth as well. Safety looks to be another much improved position with Mathieu and Thornhill.

The Chiefs might, however, eventually wish they had accomplished more at linebacker and cornerback.

"You can't do everything," Veach said. "There are only so many picks you have and so much money you have. But we feel good about the things we were able to get done. We felt like [Mathieu] was the best safety out there, and Frank Clark was the best pass-rusher out there. We utilized the resources we had the best way we could."

The Chiefs are encouraged by some early signs. Clark and Jones are a strong pass-rush tandem. Thornhill looks to be a bargain. The defense presented some problems to Mahomes and one of the NFL's best offenses during training camp.

"They do a lot of stuff," Mahomes said after one training camp practice. "It is hard to read. They get me a good amount of times where I think I have them picked up, and they have something that goes off of something they may have done two days earlier. Just having that inbox where they can go and show one blitz one day and then do the exact opposite the other day when it looks the same will be something that will be hard for other offenses to progress against."

The Chiefs are racing to get their defense ready by the Sept. 8 regular-season opener against the Jaguars. The deadline looms larger with every passing day, and Spagnuolo might have to simplify his defensive plans, at least to begin with.

"That's something I have to make a real hard decision on," Spagnuolo said. "It will be dictated by what the guys can do. I do believe that as you approach this thing, you'd better make sure that they're not thinking and that they're playing, if that makes any sense. I'm hoping we've got the kind of guys that can handle multiple defensive packages and still play fast, but we'll see."