Aaron Rodgers had Jay Cutler and still has Matthew Stafford. 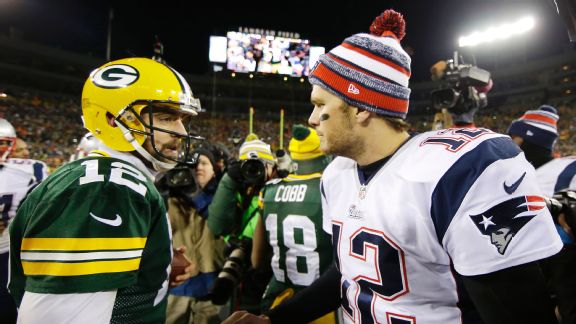 Tom Brady and Aaron Rodgers face off as starters for the second time Sunday night.
• Players define their GOATness »
• What if Rodgers played in NE? »
• Contemporaries, not rivals »

Not exactly the same kind of quarterback rivalries.

Brady played Manning 17 times during his career (winning 11) and has faced Pittsburgh's Roethlisberger 10 times (with eight wins) and counting.

Through no fault of his own, Rodgers has never found the kind of regular quarterback rivalry that can endure throughout a career like Brady has. That's just another reason there's so much intrigue about Sunday's showdown in New England -- only the second time that Rodgers and Brady have started against each other.

Even Rodgers struggled to come up with his natural quarterback rival.

"I'm not sure," the Green Bay Packers star said, although he correctly identified the quarterback he has opposed the most.

"It feels like the guy I've maybe competed against the most might be Matt Stafford," Rodgers said. "We've played a number of games together over the years. He's obviously been the established starter there for just about a decade, I think. We've played a ton of games with each other, but they haven't had maybe the marquee matchup, as the media enjoys it, like the ones you mentioned. I enjoy competing against great players and obviously Tom is right at the top."

The once-every-four-years AFC-NFC divisional rotation accounts for most of what has kept them apart, but this should have been at least the third meeting. Rodgers missed the 2010 game at New England because of the concussion he suffered the previous week against Detroit. Or the fourth meeting, if not for the Packers' meltdown in the 2014 NFC Championship Game at Seattle. Rodgers appeared in the 2006 game against Brady and the Patriots at Lambeau Field in relief of Brett Favre, broke his foot and missed the rest of the season.

Brady has faced 15 different quarterbacks at least five times, including playoffs, in his career as a starter. Rodgers has faced seven QBs at least five times. The only common one is Eli Manning, one of only two quarterbacks with five starts against Brady to have a winning record (3-2). Drew Brees (also 3-2) is the other. Rodgers is 4-2 against Manning and has a losing record against only one quarterback with a minimum of five head-to-head matchups -- Kyle Orton (who is 3-2 against Rodgers). Russell Wilson (3-3) and Rodgers will face each other next month in Seattle.

Save the cliché that quarterbacks don't play one another; games like this have a different feel.

"When a quarterback like that steps on the field, you can feel the atmosphere of it," Packers cornerback Tramon Williams said. "There definitely is a tangible feeling when you have a guy like Brady on the field."

Even Green Bay's Mike McCarthy spared everyone the coach-speak angles when it came to Rodgers and Brady.

"If you want to study how to play quarterback, you need to watch that game Sunday night because you're going to see all the little things," McCarthy said.

"From pure quarterback play, I think this is definitely one you want to watch."

Brady downplayed the idea of a quarterback-versus-quarterback rivalry, saying, "I actually see it more as teams than players. I mean unless you maybe met in the Super Bowl a bunch of times."

But he admitted he has to approach such a game differently.

"The challenge from my standpoint is knowing we have to be incredibly productive as an offense," Brady said on a conference call with reporters. "I just remember playing him one time at Green Bay, we actually had an opportunity late in the game to make some plays to help us win, and we didn't get to do it. It's just whenever you play against another prolific offense with a great quarterback, you can't have a day where you play less than your best or you lose, and that's what makes it tough to beat. I know we can't turn it over, I know we're going to have to possess the ball. I know we're going to have to score in the red area."

When asked if that's how he approached games against Manning, Brady said: "Yeah, and when you do that, you do things against those teams that are probably a bit more aggressive than other teams. I know we've gone for a lot of fourth downs against Peyton Manning, because you realize if you punt to him it could be one play and they gain the same distance back. So really, possessing the ball is what's most important. I played against Peyton a lot. He was as great a player that's ever played the position, just like Aaron, just like Brett Favre. You just have to have a great game. If you don't, they'll make you pay and then you lose."

Despite their infrequent on-field meetings, they have spent plenty of time together off it. A friendship formed out of their mutual admiration, and Rodgers admitted to following some of Brady's dietary habits in order to help extend his career. Although Rodgers is a much more mobile quarterback than Brady ever was, Rodgers said early in his career he studied the way Brady moved within the pocket because it was so effective.

"I think there's a lot of things we have in common, so it's great to talk about those things," Brady said. "There's probably not many people that I've had a chance to talk to that go through a lot of similar experiences as I do, and he's probably one of those guys."

While Brady and Rodgers enjoy each other's company off the field, this may be the last chance for everyone else to enjoy them on the field together.

Even a Hall of Fame quarterback like Favre can appreciate that.

"Those type of matchups are really kind of what we look forward to as fans," Favre said this week on SiriusXM NFL radio. "And this is an epic matchup. Now, is it more than those two playing against each other? Absolutely, and as a coach you're stressing that. But it is fun to watch. From a fan's standpoint this is what you look forward to seeing -- [Larry] Bird and Magic [Johnson], or a great hitter against a great pitcher.

"This is one of those games that the ratings will be sky high, and rightfully so. Both quarterbacks are as good as any that has ever played the game, and totally different in styles. I don't know who I'd give the nod to or the advantage to. Both teams, I'm sure, and both fan bases love their chances."