Cowboys' offense in 2020: Is it better with Andy Dalton on board?
39dTodd Archer
Best routes for rookie NFL wide receivers: Why Lamb's out, Aiyuk's screen are unstoppable
17hSeth Walder
Cowboys' Poe wants Jones to support players
4d
Will Dak Prescott be with Cowboys for the long haul? Answer is near
3dTodd Archer
Virtual or not, Sean Lee's prep work for Cowboys' season never ends
14dTodd Archer
Jun 2, 2020

The Dallas Cowboys were a disappointing 8-8 in 2019, which led to a change at the top, with Jason Garrett out and Mike McCarthy in as head coach.

Through NFL free agency and the 2020 NFL draft, the Cowboys seemed to fill holes and find improvements, but the virtual offseason program has left some questions that cannot be answered yet. Still, ESPN's Football Power Index gave the Cowboys the fifth-best chance to win Super Bowl LV, even if it is 5%.

With that as a backdrop, have the Cowboys gotten better, stayed the same or gotten worse?

Here is a position-by-position look at the Cowboys' offense for 2020:

Better, worse or the same? Better

It's actually far better, and it doesn't have to do with the improvement Prescott showed last season. It has everything to do with the arrival of Dalton in free agency.

Rush threw three passes in three seasons as Prescott's backup and none since 2017. Although Prescott has not missed a start in his career, would you feel more confident about Rush winning a game or Dalton? Dalton has 204 touchdown passes and more than 32,000 total passing yards in his career. He took the Cincinnati Bengals to the playoffs five times, though he does not have a postseason victory. He has not had a winning record in four straight seasons, but he will be surrounded by better players if called upon to play.

He is guaranteed $3 million this season, which is $900,000 more than what Rush was going to make.

Better, worse or the same? The same

With no big changes here, the growth at the position will come from the steps Pollard takes in Year 2.

In 2019, Elliott was not as explosive as he was in his first three seasons. Maybe some of that was because he held out of training camp, but he still ran for 1,357 yards and was the NFL's fourth-leading rusher. McCarthy did not have a runner like Elliott with Green Bay, but he had success running the ball and has said Elliott will get a lot of carries.

Given the price the Cowboys paid for Elliott, that would seem to limit Pollard's opportunities. Will McCarthy add some gadgets to his offense to use Pollard and Elliott in a way similar to how New Orleans Saints coach Sean Payton used Alvin Kamara and Mark Ingram? Pollard had two 100-yard games as a rookie and showed that he can make big plays. Getting him involved more in the passing game would help, too.

Better, worse or the same? Better

This was a tougher call than you would expect, even with the addition of Lamb as the team's first-round pick. That's how good Cobb was last season as the No. 3 receiver. But if Lamb's big-play ability can carry over to the NFL, the Cowboys could have the league's best trio.

Cooper was signed to a $100 million contract, including $40 million fully guaranteed, in the offseason, but his production trailed off for most of the second half in 2019. He finished with career highs in yards (1,189) and touchdowns (eight) despite the slump. Gallup had 66 receptions for 1,107 yards and six touchdowns and made a number of athletic catches.

With Cooper, Gallup and Lamb, the Cowboys have the ability to strike from anywhere on the field, but what's behind them? Brown missed last season because of a knee injury. Wilson has ability but has not been able to stay healthy. After a solid start, Smith did not get many chances to play. Bryant was seen mostly as a special-teamer.

Better, worse or the same? Worse

Some critics believe Witten was an impediment on an offense that put up great numbers. He had 63 catches for 539 yards and four touchdowns, and his blocking was solid. The Cowboys will miss him.

Jarwin has to show that he is ready for more action. He can stretch the field better than Witten, but when it's third-and-6, can he come close to what Witten's productivity was over the years? It isn't about the flashy plays. It's about the consistency in big moments. The Cowboys believe that Jarwin can be that guy because they gave him a $22 million contract, but he still has to prove it.

Bell was added because of his blocking ability, but he played more in Kansas City (38%) than many would think for Travis Kelce's backup. If Bell can help as a blocker, that will free up some opportunities for Jarwin, too.

The group might turn out to be better than it was in 2020, but you can't say it is better at the moment. 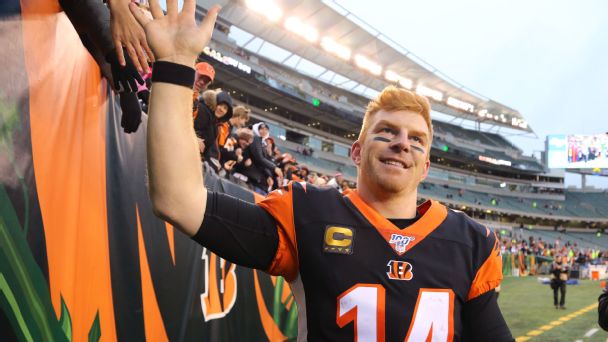 Better, worse or the same? Worse

In some ways, this should be worse, with an asterisk. Losing Frederick is a big blow because he was voted to the Pro Bowl in 2019 after missing the previous season because of an autoimmune disease. To a lot of other teams, losing a Pro Bowl center would be devastating, but the Cowboys believe that they will be OK at the spot in 2020.

Without Frederick in 2018, Prescott was sacked 56 times. In Frederick's return in 2019, Prescott was sacked 23 times. Having Frederick helped, but what also helped was the quarterback's consistency in his drop from center and his ability to get rid of the ball quickly. Also, the Cowboys went back to their former ways of pass protection last season after changing them in 2018 under new line coach Paul Alexander.

Looney is not Frederick, but he proved to be a solid replacement in 2018. If he does not win the job, then last year's third-round pick, McGovern, who did not play because of a pectoral injury, can step up.

The line remains a strength because the Cowboys return Pro Bowlers in Smith and Martin, and Collins had his best season at right tackle in 2019.