FRISCO, Texas -- For the third time in as many offseasons, the Dallas Cowboys' priority is to sign quarterback Dak Prescott to a long-term deal.

It did not happen in 2019, when he played out his rookie contract, bypassing close to $90 million in guaranteed money for a $2 million base salary.

It did not happen in 2020, when he opted to play the season on the $31.4 million franchise tag, bypassing a deal worth $110 million guaranteed.

Through it all, the Cowboys and Prescott have maintained they have the same goal: a long-term commitment. While there has been disappointment in not getting a deal done, there has not been the bitterness these negotiations can bring.

But will the third time finally be the right time?

Let's take a look at questions when it comes to the present and future for the Cowboys and Prescott.

When can the Cowboys and Prescott start negotiations?

Now. When Prescott failed to sign the Cowboys' multiyear offer by June 15, 2020, he had to play the season on the tag. Per franchise tag rules, the sides could not talk or complete a new deal until after the 2020 season. With the loss to the New York Giants on Sunday in Week 17, the Cowboys' season ended at 6-10.

The timing is also good because coach Mike McCarthy said Prescott's recovery coming off a fracture and dislocation of his right ankle that required surgery in October is on course.

Is there a rush to get a deal done? 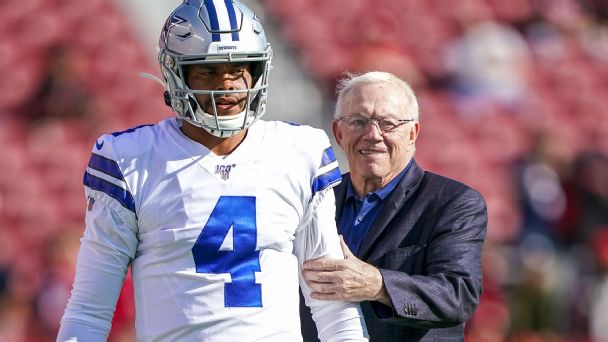 Like immediately? Not really. These talks should not be starting from the beginning because both sides know where the other stands -- or at least they should.

The Cowboys would like to know all of the details regarding how the coronavirus pandemic will affect the league's salary cap, which will have a $175 million floor. The Cowboys should carry over more than $20 million in unused salary-cap space from 2020. They have prepared for Prescott's cap figure in part by restructuring the contracts of offensive linemen Tyron Smith and Zack Martin and defensive end DeMarcus Lawrence.

Considering owner and general manager Jerry Jones is a member of the NFL Management Council, the Cowboys should have a strong understanding of the 2021 finances. Dallas should be able to work out a deal without fear of cap problems.

Is the length of Prescott's deal an issue?

Yes, the biggest sticking point will likely remain the length of the contract. The Cowboys wanted at least a five-year deal. Agent Todd France wanted a four-year deal for Prescott so the quarterback could get back into the market as soon as possible, especially with the expectation the league's new television deals could lead to a big rise in the salary cap.

That issue remains, but so does a smaller salary cap, which makes the juggling a little more difficult for the franchise.

Perhaps the Cowboys offer a long deal, say six years, which could void to four years. They would be able to stretch out the cap hit in the first couple of seasons and allow Prescott the possibility of getting on the market sooner.

Perhaps Prescott could accept a five-year deal as long as the Cowboys agreed not to use the franchise tag on him at the end of the deal. That does not seem too big of an ask because if Prescott has not won a Super Bowl by then, would the Cowboys look to enter a second decade with him as their starter?

Jones acknowledged Tuesday that Prescott is in a good position regarding contract discussions.

"I don't know how you could have any more leverage," Jones said on 105.3 The Fan. "... His evolving into an NFL quarterback has been nothing short of a perfect picture. He has great ability, in my mind, to win games. He's talented. He certainly has the experiences and he has all the things, which has been substantiated by what we've offered Dak. You wouldn't offer Dak what we offered in the past if you'd not thought he was very special. The issue is, how do you come together? And that's no stranger to me. I've been doing it all my life, putting things together. We've got to get it together."

It's pretty much set. The Cowboys last year had to contend with the possibilities of Patrick Mahomes and Deshaun Watson signing long-term deals with their respective teams, which could have affected Prescott's numbers.

Mahomes signed a 10-year extension worth $503 million with the Kansas City Chiefs. Watson signed a four-year, $156 million extension with the Houston Texans. The Cowboys' offer to Prescott last June was averaging $34.5 million per year and had a $50 million signing bonus. The guaranteed money offer was $110 million.

The Cleveland Browns (Baker Mayfield), New York Jets (Sam Darnold), Buffalo Bills (Josh Allen) and Baltimore Ravens (Lamar Jackson) can offer their quarterbacks mega-contracts this offseason. Of the four, Jackson, the 2019 league MVP, and Allen could more directly affect the market. There are no veteran free agents who could command top dollar like Prescott.

A deal in the range of $35 million to $40 million a year seems to be the going rate now.

What about the chances of another franchise tag?

It's a possibility. Teams can use the franchise tag on players starting Feb. 23 through March 9.

Maybe the Cowboys want to use the tag on Prescott again to judge how healthy he is because Dallas won't know for sure until the QB enters training camp. If the Cowboys go with a second straight tag, it would cost them $37.7 million. Given the forthcoming cap constraints, that is a big number, but a long-term deal would have a first-year cap hit in excess of $30 million anyway.

If the Cowboys go the tag route again, one would question whether Prescott shows up for the voluntary offseason program. He was not in the virtual offseason program last year after he was tagged, although he did have workouts at his turf field in his backyard with running backs, wide receivers and tight ends.

It's possible the Cowboys could tag and trade Prescott, but for that to happen the quarterback would have to sign the tender first. The Cowboys could allow France to seek a trade that they would then have to OK.

A second tag would again raise the possibility of 2021 being Prescott's final season with the Cowboys. Kirk Cousins played two years on the franchise tag with the Washington Football Team in 2016 and '17 and signed with the Minnesota Vikings in 2018.

Would the Cowboys use a first-round pick on a QB if they don't get a deal done?

With the Cowboys, you never say never. As Jones has said, just because he says something doesn't make it so. While the Cowboys have expressed the desire to keep Prescott, until they actually do it, anything is on the table.

The Cowboys never predicted they would have a chance to draft wide receiver CeeDee Lamb in the first round last spring, but they are happy he fell to them. Would they be in position to take a Zach Wilson or Trey Lance at No. 10 overall in the first round of the 2021 draft? Maybe not.

The Cowboys, however, must address their defense, and using a first-round pick on a quarterback does not make much sense unless Prescott is on the tag again and they plan to move on from him after 2021.